Drake and hip hop trio Migos brought the ‘Aubrey & The Three Amigos’ tour to the MGM Grand Garden Arena Friday and Saturday in Las Vegas, charging up 26,000-something fans across two nights with back to back, nonstop hits and hot tracks off 2018 album Scorpion.

“Las Vegas, front to back, showing a lot of love by the way, and I’m gonna tell my brothers too — it’s not that regular kind of love, it’s that day one type of love in here tonight,” Drake said when reintroducing Quavo, Takeoff, and Offset for a mid-set collaboration. “So it’s only right me and my brothers give you some of that day one love back.”

The foursome performed Migos’ 2013 debut hit ‘Versace,’ remixed by the Canadian-born rapper when performing to the crowd, “I’m born in Toronto but right now I’m feeling like Vegas adopted us.”

Short of signing papers, Vegas adopted the quartet by way of its rafters-shaking reception to a two-hour performance carried by a mostly solo Drake and bolstered by a massive custom-built, high-tech video stage incorporating projections, content mirroring, and other jaw-dropping special effects. 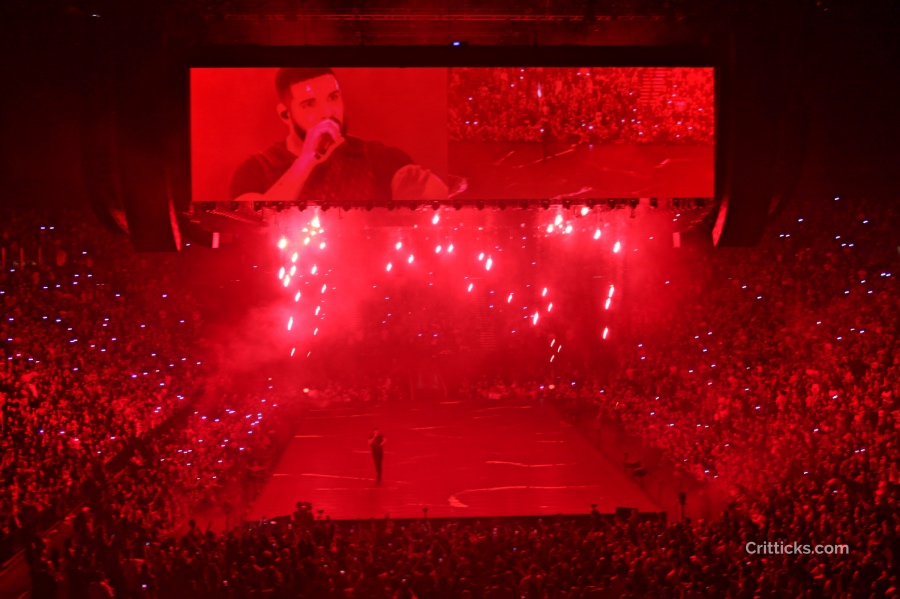 An always-changing video stage offers the audience a 360-degree view of the star, who performs atop the rectangular structure supported by 288 video decks and 260 feet of video paneling that constantly morphs around Drake, transforming into everything from a glowing, neon kaleidoscope to a stories-tall phone screen scrolling through Instagram.

The revolutionary stage was host to Drake’s biggest hits, including ‘Hotline Bling,’ ‘One Dance,’ and the fan-favorite ‘In My Feelings,’ alongside fresh singles ‘Nice for What’ and ‘Nonstop.’

Drake next hits Phoenix before launching a six-night residency in Los Angeles in an ongoing North America tour that wraps up Nov. 18 in Atlanta.