Nearly a decade ago, then-twenty year old Miles Teller found himself impacted by a life-changing car accident. “My buddy lost control of my car going 80 mph. We flipped eight times,” Teller said of the near fatal crash. “I got ejected out the window. The car landed and I was just laying like 50 feet from the car, unconscious, covered in blood. My buddy thought I was dead.” Teller, now 29, would go on to lead Hollywood’s latest charge of young and rising stars, with turns in such critically acclaimed works as The Spectacular Now and Whiplash. Teller’s best outing yet comes in Bleed For This as real-life boxing champion Vinny “The Pazmanian Devil” Pazienza, who fights his way back from debilitating injuries – sustained in a grisly and graphically-depicted car accident – to return to his rightful place in the ring.

Teller, whose movie star visage still bares the scars from the wreck, must have felt chilled from the eerie scene in which Vinny – bloodied and near-unrecognizable, his head hanging limply out of a flashy car’s shattered passenger seat window – could be mistaken for a corpse, with the camera lingering on Teller’s blood-soaked and mangled body. “This is what I do,” a recovering Vinny later shares with father Angelo (Ciarán Hinds), “I don’t know how not to do it.” Vinny (past the point of being told he may never walk again, much less step foot back in the ring) is avowing his inability to be anything other than a professional fighter, but the words similarly ring true for Teller – whose desire to perform dictates succumbing to the acting muse.

Teller and the real life Vinny Paz, 53, are bound by a unique and coincidental – or fateful – connection, both having luckily walked away from serious car accidents and going on to earn greatness in their respective careers. His neck broken, his spinal cord nearly severed, and his head encased in an unsightly, constricting metal brace called a Halo, Vinny – in spite of being warned that the slightest miscalculation or the smallest of missteps could lead to the gravest of consequences – fights his way towards recovery, and the ring, with little more than pure willpower and the assistance of trainer Kevin Rooney (Aaron Eckhart). The determined Rhode Islander’s miraculous and unbelievable (but nonetheless true) return to boxing inspired Bleed For This, with the rousing story – justifiably deemed the greatest comeback in sports history – cementing the legend of Vinny Paz, the only professional boxer to hold titles at lightweight, light middleweight and super middleweight.

The Palms Casino Resort in Las Vegas, Nevada hosted a red carpet and Las Vegas premiere screening of Open Road Film’s latest awards contender, with Teller and Paz among the night’s honored guests. Crittick Cam Bonomolo spoke with star Miles Teller, who shared what it was like portraying a real life inspiration in Bleed For This.

Cam Bonomolo: Bleed For This joins a fraternity of sports comeback movies like Rocky III, Cinderella Man, The Fighter and The Wrestler – what helps set Bleed For This apart from its colleagues?

Teller: Bleed For This is a true story, this is hands down the greatest comeback in sports. You have a guy who was faced with very real circumstances, I mean, he broke his neck. For him to come back from that and box again was nothing short of impossible. Every doctor was telling him- nobody thought he’d be able to do it. And talk about just one-on-one, him against himself, him against all odds, to be able to come back from that and then win three more world titles afterwards? It’s chilling what this guy went through, and this story is going to inspire a lot of people.

Teller: (Laughs) And Rocky was also not a real person.

CB: You’ve most usually portrayed fictionalized characters – is it easier or harder approaching a role like Vinny Paz over tackling a fictional character?

Teller: I mean, definitely there is an added pressure, I always say you put a pressure on yourself to perform at a certain integrity that you think is required in this business. With that being said, Vinny’s a well known guy in the boxing community and I had a lot of material to go off of. I was able to YouTube a lot of different things, so you know, you get certain mannerisms, you have a lot of tools in front of you. But you know, you know the guy’s gonna see it. Vinny only retired ten, fifteen years ago, so it’s still very fresh for him. It means everything that he supports the movie and that he had the reaction that he did.

CB: You’ve said playing a boxer was on your bucket list. What’s your next ideal role?

Teller: I don’t know, man, I don’t know. I just played – we did this movie based on the book ‘Thank You For Your Service’ where I played a staff sergeant in the Army based on a real guy, that was a very high-integrity project, I’ve played a wildland firefighter, you know, I don’t know. I am attracted to kind of like blue collar guys, those are just the guys I grew up in- I’m able to like, relate to that world a little easier. So I don’t know man, I’m inspired by everyday people all the time.

CB: What do you hope audiences take away from Bleed For This?

Teller: Man, I think there’s a lot of crap in theaters, you know, I just think this movie, it’s not – and look, I’ve been a part of movies that take place in a sci-fi world, or a fictionalized world, and I don’t know, this is a real person, this is his family, or people that you can relate to. So I think people are gonna be able to relate to it and I know people are gonna be inspired by it. The guy just never quit.

REVIEW — "Bleed For This" 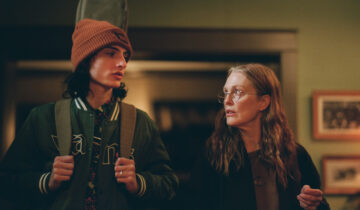 SUNDANCE REVIEW – “When You Finish Saving the World”