Exhilarating, emotional, and well worth the wait, Top Gun: Maverick is high-speed entertainment that surpasses the original.

What follows is one of the best opening action sequences I’ve seen in some time as Maverick shows just how much speed he needs by becoming “the fastest man alive” while piloting a test aircraft at Mach 10 speeds. Still hot headed and determined, he strives to be the best, even if it means going against the orders of his CO (Ed Harris)—who tells Maverick that he is a dying breed, due to the advancement of drone pilots and remote combat.

Indeed, Maverick is a flyboy at his core. By now, he should be a Two-Star Admiral, at least. But because he loves being in the air, he’s still a Captain. Due to his insubordination, he’s ordered to return to Miramar, California, the home of TOPGUN, to train a new batch of hotshot pilots for a dangerous and specialized mission.

However, one of the pilots is Lt. Bradley Bradshaw (Miles Teller), call sign: “Rooster,” the spray-tanned son of Maverick’s late friend and Radar Intercept Officer Lt. Nick Bradshaw, aka “Goose” (Anthony Edwards). It’s safe to say the two have history as Rooster carries a lot of animosity toward Maverick and the sins of his past.

Once the film arrives in a familiar setting, the story amps up the nostalgia and features plenty of callbacks to the original film and the overall spirit of the 1980s. There is, of course, the obligatory shirtless beach sport scene (this time “dogfight football” instead of volleyball), a fun aerial training montage, a “Great Balls of Fire” piano scene, a tower flyby, and multiple flashbacks to Maverick’s friendship with Goose and his family.

Goose’s death weighs heavily over Top Gun: Maverick. The film dives deeper into the grief and guilt that Maverick has carried all these years over the death of his best friend and co-pilot; a plot point that received short shrift in the first film. However, the aerial sequences are what will really take your breath away.

Just as George Miller did with Mad Max: Fury Road, director Joseph Kosinski (Oblivion, Tron: Legacy) pushes the action genre to a new level with Top Gun: Maverick. The dogfights are enthralling as they put the actual actors and the audience directly inside the cockpit for every barrel roll, snaking freefall, and inverted climb. The practical stunts in this film embarrass the green-screen antics of lesser action movies. Combined with an amazing score and teeth-rattling sound editing, the action looks, sounds, and feels real.

The film also boasts an impressive young cast of pilots that embody the cocky machismo of the 80s film. None, though, pull off that swagger as much as Hangman (Glen Powell), a skilled-but-arrogant pilot with Han Solo’s charisma and Iceman’s competitive dickishness. The rest of the new recruits include Monica Barbaro (Phoenix), Jay Ellis (Payback), Danny Ramirez (Fanboy), Greg Tarzan Davis (Coyote), and Lewis Pullman (BOB).

Speaking of “Iceman”, it turns out Tom Kazansky (Val Kilmer) has moved up the ranks over the years. Now Admiral and Commander of the US Pacific Fleet, Iceman has been looking out for Maverick and helping him keep his wings all this time. The two former wingmen share a heartfelt reunion scene that gives the ailing Val a welcomed chance to shine once more on the silver screen.

There is also romance in Top Gun: Maverick. While Kelly McGillis’ Charlie does not return, a prior flame of Maverick’s is introduced in the form of admiral’s daughter and Hard Deck owner, Penny Benjamin (Jennifer Connelly). In what is, perhaps, an unintentional 80s Easter Egg, Jennifer Connelly is welcomed by a “Let’s Dance” needle drop when she first appears on screen. Coincidence, or a subtle nod to her former Labyrinth costar, David Bowie? Either way, both Cruise and Connelly look good together and have natural chemistry that is supported by Penny’s teenage daughter, Amelia (Lyliana Wray), who, in one scene, catches Maverick sneaking out of her mom’s window and jumping to the ground below in a funny moment of role-reversal.

From aerial dogfights to behind-enemy-lines rescue missions, the third act of this film is bombastic and badass. The themes of regret, redemption, and responsibility clash within Maverick as his squadron inches closer to a perilous mission that may be impossible. Thankfully, Cruise knows a thing or two about impossible missions. His Maverick has matured, and he understands that successful completion of this mission will rely on a series of miracles. He rejects his TOPGUN Admiral’s (Jon Hamm) idea of acceptable loss and, if necessary, will make the ultimate sacrifice to ensure that every pilot comes home.

Personally, I’ve anticipated this movie for decades, and I can definitively say it has absolutely, 100% been worth the wait. It is a rare legacy sequel that surpasses the original. Both emotionally and technically, it zooms past Top Gun while retaining all of its heroism, charm, and bravado. Filmed in IMAX, Top Gun: Maverick needs to be experienced in theaters, so go while you can, put your phone on airplane mode, and take to the skies like never before. 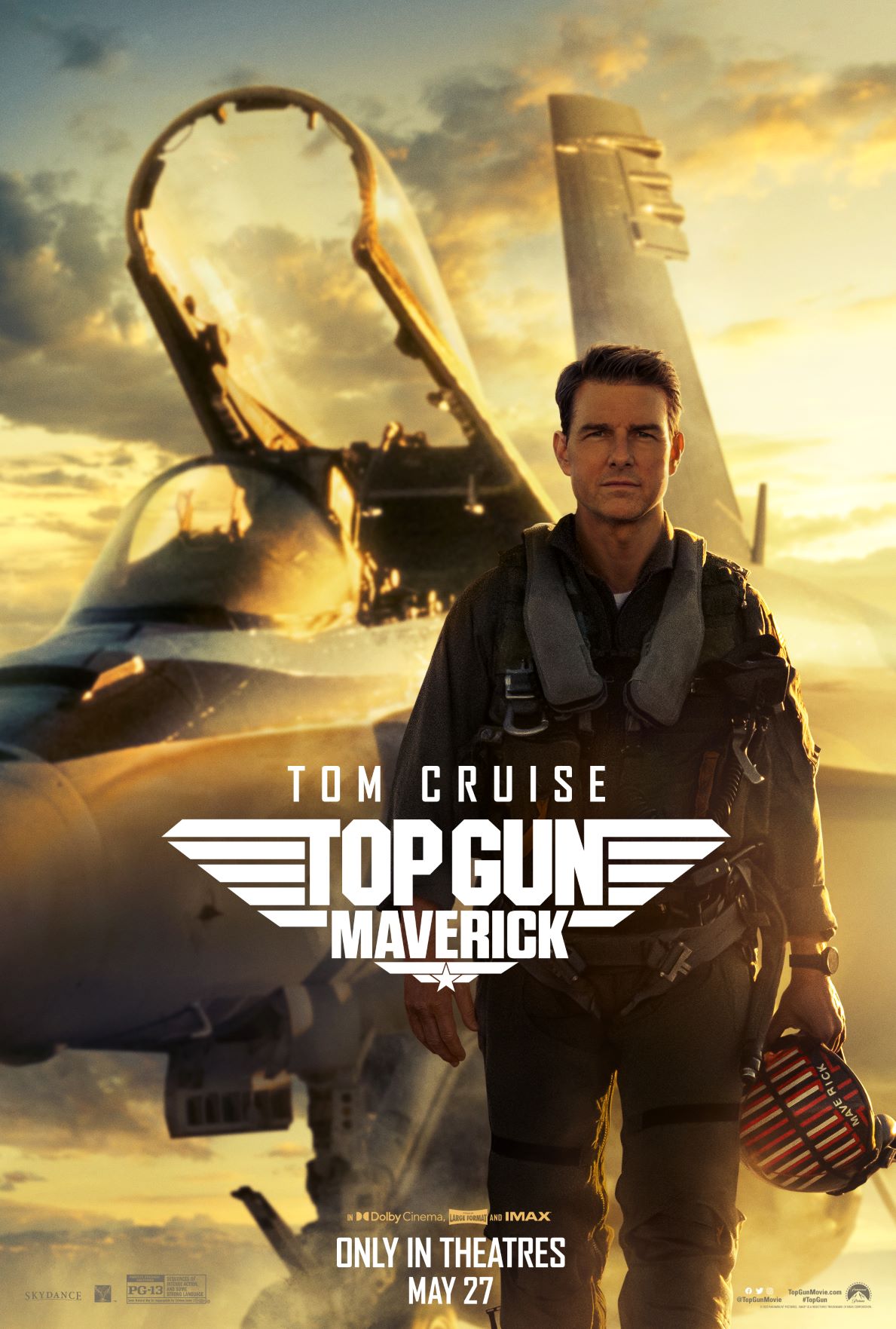