REVIEW — “War on Everyone” Blu-ray

Bob (Michael Peña) and Terry (Alexander Skarsgård) are a pair of corrupt cops up to all kinds of no good in War on Everyone, a mean-spirited and not-as-fun-as-it-should-be black comedy buddy cop flick from John Michael McDonagh (The Guard, Calvary). Piggybacking off the bank robbing machinations of Lord James Mangan (Theo James), the dastardly duo find themselves dragged down the drain against the only pair of guys who manage to be even bigger pieces of shit than our “heroes.”

In the way that the Transformers movies are exhausting from an overload of explosion-filled action scenes, War on Everyone is long-winded and talky to the point of being exhaustive. Even Peña, always a standout in every project he does, can’t save War on Everyone. His family man Bob almost makes it bearable, but — aside from a little trip to Iceland — there aren’t enough redeeming features in the ugly War on Everyone to make it worth watching. Last year’s The Nice Guys is dark comedy cop sleuthing done right, with a pair of flawed leads and making for a charming and likable pair of anti-heroes. War on Everyone wants to be that movie, but can’t make it work — especially when the tone is so miserable.

War on Everyone‘s plodding, boring, talky, wannabe-Tarantino scenes wouldn’t be half as aggravating if they weren’t so pointless and anti-amusing. If War on Everyone‘s mean-spirited and dreary attitude didn’t already have the viewer fighting the urge to keep a finger tightly pressed over the fast forward button, ready to jump ahead at a moment’s notice, these worthless exchanges certainly will.

Lionsgate’s presentation of the film is sharp and near flawless with great detail, with an AVC encoded 1080p transfer and DTS-HD Master Audio 5.1. A two-disc set (Blu-ray, DVD and UV digital copy) includes a seven minute special feature, “Everyone Sounds Off: The Quirky Cast of War on Everyone.”

War on Everyone is now available on Blu-ray and DVD.

REVIEW — "The Fate of the Furious" 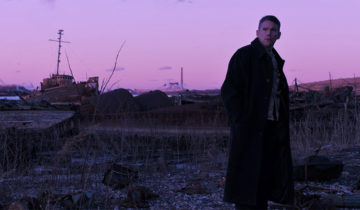