Hold onto your butts: dinosaurs will rule the Earth once more as Universal Studios Hollywood in Los Angeles, California, celebrates the 25th anniversary of Steven Spielberg’s Jurassic Park May 11—12, 2018.

The two-night only special event offers a showcase of props from the 1993 original blockbuster, a private IMAX screening of the film, live entertainment, giveaways, themed photo ops and Jurassic-themed merchandise and food, a fan costume show, character sightings, and exclusive after-hours access to Jurassic Park — The Ride.

Tickets are now available through the official website, and they’re limited — you’ll want to purchase yours before they’re extinct.

The separately ticketed event is available to Universal Studios Pass Members at a discounted price of $69. Non-members can purchase a day-night combo — including all day park admission and access to the evening event — for $129. 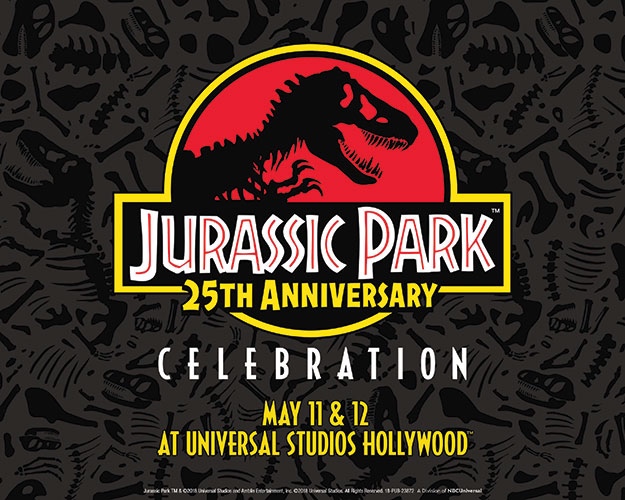 At Universal Cinema, you will enjoy a private screening of the original, blockbuster film, Jurassic Park™, the way it was meant to be seen…on the big screen.
Universal Cinema provides the quality picture, sound and comfort of a Hollywood film director’s screening room and features high-tech elegance and chic sophistication with newly redesigned 18-plex with deluxe power-reclining seats, Dolby Atmos multidimensional sound and Christie RGB Laser projection or our 7-story IMAX® featuring next generation IMAX dual 4K laser projection and 12 channel sound.

Get up close and personal with a roaming raptor in interactive photo ops.  Dress-up as a clone of your favorite Jurassic Park character and prove that you’re the ultimate Jurassic Park expert in a larger-than-life trivia game!

Go on an exhilarating river raft adventure where you’ll experience dinosaurs in their natural jungle habitat. And hold on tight as you narrowly escape a 50-foot T. rex as your raft makes an exhilarating 84-foot plunge to safety. Plus, other select attractions will be available.

Explore a showcase of props from the original film and get a glimpse into the future of the Jurassic Park franchise. Be on the lookout for Jurassic-themed items from merchandise and food to interactive demos and dance your fossils off with our modern stone-age DJ & tunes.