The park is gone — and the Jurassic franchise will never be the same.

But when their expedition to the island uncovers a nefarious conspiracy — including the creation of a new and terrifying genetically-engineered abomination — Owen and Claire become entangled in a plot that could return our entire planet to a perilous order not seen since prehistoric times.

Fallen Kingdom’s opening minutes are among the best sequences in any Jurassic movie, coming as the second-best opening scene in the franchise — second only to the ominous teaser that opens Steven Spielberg’s 1993 original — and while Fallen Kingdom never quite matches those same heights in the rest of the movie as it does in those opening minutes, this latest sequel is a fun and welcome installment to the franchise and the best Jurassic sequel since The Lost World. 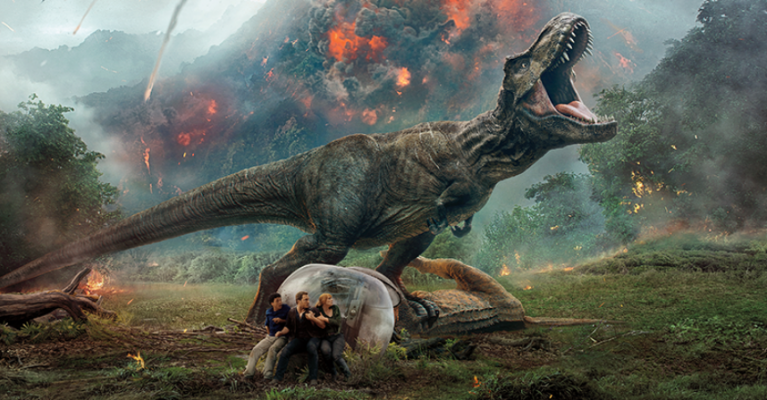 Steered by series newcomer J.A. Bayona (The Orphanage, The Impossible), Fallen Kingdom doesn’t wield the ever-present magic that Steven Spielberg’s 1993 original did, but neither have any of the other sequels — not even Spielberg’s own 1997 The Lost World: Jurassic Park, half of which is invoked here in familiar beats easily spotted by longtime fans. For all its flashy special effects and satisfying action, Fallen Kingdom lacks a sense of wonder — a surprise coming from the director of A Monster Calls — and it’s that noticeably absent touch of Spielbergian magic missing from the revived franchise’s DNA that makes it little more than a fun, if not entirely memorable, two-hour romp.

Fallen Kingdom is well-made, it’s enjoyable, and most of all, it’s entertaining — even if the near-constant animal abuse lessens some of that fun. It never ventures into Batman v Superman: Dawn of Justice or Star Wars: The Last Jedi levels of dourness or misery, but it is heavy and, at times, outright unpleasant to watch — a necessary side effect of the decision to reestablish the dinosaurs as animals and not simply teethy sci-fi movie monsters.

Further expanding on the idea of weaponized dinosaurs established in its 2015 predecessor, Fallen Kingdom is more man versus man than man versus dinosaur until its marquee dino, the Indoraptor, is unleashed to horrific results. It’s there that Fallen Kingdom adds some devilishly fun horror touches to its plate and is better off for it — especially as the prehistoric creatures get their gratifying revenge.

If there’s one major flaw with Fallen Kingdom, it’s a late development surrounding a certain character whose introduction will have an irrevocable impact on the franchise. The character almost comes as the personification of themes and warnings explored throughout the series — mostly by chaotician Dr. Ian Malcolm (Jeff Goldblum), who returns here all too briefly — and while that character could be viewed as the natural evolution of themes explored even in the Michael Crichton-inspired 1993 blockbuster, others could view it as a risky jump-the-shark moment for the 25-year-old franchise.

Fallen Kingdom isn’t the smartest blockbuster of the season but is more than worth the trek to the theater in a crowded summer. With Fallen Kingdom, the Jurassic World franchise truly moves on from the now well-worn trajectory of Jurassic Park — and the enticing ending hook for Jurassic World 3, already dated for June 11, 2021, is an intriguing one that steers the franchise in a bold and exciting new direction.