The Discovery is directed by Charlie McDowell, written by Justin Lader and Charlie McDowell and has a cast featuring Jason Segel, Robert Redford, Rooney Mara, Jesse Plemons, Ron Canada, and Riley Keough. It tells the story set the near future, where breakthrough scientific discovery by Dr. Thomas Harbor, has definitively proved there is an afterlife. While countless people have chosen suicide to reset their existence, others try to decide what it all means. Among them is Dr. Harbor’s son Will, who has arrived at his father’s isolated compound with a mysterious young woman named Isla. As a big fan of Charlie McDowell’s directorial debut, The One I Love, and with the stacked cast attached, I was very excited to here this was gaining some buzz as it played at various festivals, but the lukewarm reception upon its release had me scared my hopes were too high. So what did I think? The Discovery is a fascinating investigation into grief with a lot of big ideas that features great performances from its leads and a lot to think about. Is it as good as I would have hoped? No, not at all. Is it as bad as the reviews are saying? No, not at all.

Charlie McDowell is directing here and it is a very strong sophomore effort. He creates a very cool vibe and tone reminiscent of something like Eternal Sunshine of The Spotless Mind or Being John Malovich. He is able to tell a very heartfelt and human story while creating a realistic future with big ideas. He never loses grasp of the narrative, keeping it all very contained and plausible. While this is not as good as The One I Love, it is a very strong effort worth watching for its originality alone. With an already strong resume, I can see him earning a spot along great sci-fi directors like Shane Carruth, Charlie Kaufman, and Duncan Jones. He is certainly a talent to watch and I will see anything he makes. 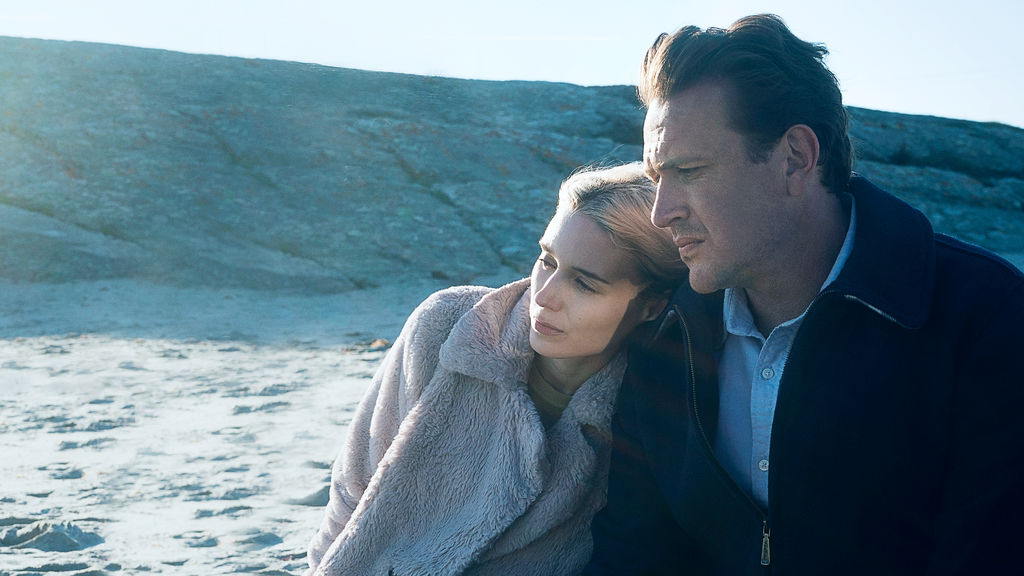 Justin Lader and Charlie McDowell penned the script here and it is really great. They have crafted a very cool and realistic future. The characters are very deep and fleshed out and dialogue is honest and thought provoking. They delve into very intriguing and complex ideas unexplored by other sci-fi properties. Now that’s not to say it’s without its faults. The first two acts are very strong and compelling but, unfortunately, the third act kinda falls apart. The entire time we feel as though we are being led towards a huge revelation or reveal, and while there is one, it feels very underwhelming. What we learn is cool and interesting, but it doesn’t feel as big as it should. The execution is very poor and you end on a sour note, which is disappointing because the first two acts are so good. Despite a lackluster ending, The Discovery has a great script.

The Discovery features a great cast and they all do great. Jason Segel plays a very out of type character and possibly gives the best performance of his career. He does a great job as the leading man and conveys a lot of emotion through a very restrained performance. I love seeing him delve into more dramatic roles and if he continues at this pace, he’s a talent to watch. Rooney Mara also does a great job playing a very damaged and complex character. Robert Redford does great as usual, playing a character that reminded me of Lancaster Dodd from The Master. While his performance never comes close to Phillip Seymor Hoffman’s, he still does great. His character motivations confused me at times, but upon re-watching, I’m sure they’d make more sense. The supporting cast also does a great job here with Jesse Plemmons being a notable stand out. Everyone here does great.

On a technical level, The Discovery is actually pretty good. The cinematography is very effective, adding to the overall depressing tone of the narrative. The color pallet is very muted, featuring a lot of gray and blue. The score isn’t too memorable, but it does do its job. The editing is also very good. Almost everything in the movie is great. The acting, the script, the direction, all top notch. Unfortunately, the ending is so underwhelming that it seems almost unremarkable. The ending isn’t even bad, it’s really cool. It ties together much of the loose ends and adds to the themes of the story, it’s just executed so poorly. Maybe with a different angle, or maybe a different set up to the final act, things would have been cleaner or more impactful. While I dug this movie a lot, I can’t help but feel underwhelmed.

In short, The Discovery is a well acted, intriguing sci-fi romp with big ideas and a great script that sadly ends on a sour note. While the ending isn’t as great as it could have been, the rest is exceptional. 3.5/5

REVIEW — "War on Everyone" Blu-ray

GIVEAWAY — "War on Everyone" Blu-ray