Directors Will Speck and Josh Gordon bring the story of  Lyle, Lyle, Crocodile to life as a live-action/CGI musical comedy. With snappy songs and silly sweetness, Lyle, Lyle, Crocodile is sure to make young audiences smile. (However, parents might need to mentally check out for this one.)

Incredible, young Lyle the Crocodile (Shawn Mendes) can sing like a pop star, but he can’t speak. So when a fame-hungry, failed magician  Hector P. Valenti (Javier Bardem) adopts Lyle and tries to make a Broadway spectacle out of him, the shy croc goes silent from stage fright.

This Michigan J. Frog act quickly wears on the patience of the audience and his indebted “manager/owner” who must skip town when the show goes belly up. Valenti abruptly abandons Lyle alone in the attic for 18 months until a new family moves in.

That’s when the fun begins right? Not so fast.

Based on the classic children’s book series by Bernard Waber, Lyle, Lyle, Crocodile follows the familiar tale of a kind and talented creature who secretly bonds with a family. But unlike Paddington and David Lowery’s Pete’s Dragon remake before it, Lyle, Lyle, Crocodile lacks the same level of whimsy, emotional depth, and resonance.

While young kids may float along with this cinematic version of friendly Lyle, the film kind of sinks for everyone else. Unfortunately, not much happens in the movie. It’s almost as if the source material lacked enough content to translate into a full-length feature film.

With all the noise about the film’s soundtrack and songwriters Benj Pasek & Justin Paul’s pedigree, there are only really three or four original songs in the film that are then reprised throughout. And they aren’t even bangers. They’re just okay. It’s like The Greatest Showman duo knocked them out on a weeknight.

Fortunately, Bardem steals the show. The veteran actor and oft-typecast villain impresses with his showmanship and musicality. He really goes for it in this role, and it is surprising and delightful to see such a serious actor tackle such an animated character.

As for the Primm family members, Constance Wu is refreshingly upbeat as the stepmom trying to connect with her lonely son Josh, played oh-so-earnestly by Winslow Fegley. Scoot McNairy is serviceable, but interchangeable. His vanilla dad character could have been played by any actor (Tom Cavanagh, Breckin Meyer, or Jason Marsden, perhaps?) However, Stranger Things‘ Brett Gelman is as dastardly and annoyed as ever as butthurt downstairs neighbor Mr. Grumps.

We never learn why Lyle is afraid to sing in public or showcase his extraordinary talent, even if it could save the day. What a croc! (Not a compliment.) No backstory for Lyle is invented or given, and if one was, I must’ve missed it. I get that Lyle seeks family, not the spotlight. And, no, no one should be forced into something they don’t want to do. But then what is this movie about? Finding your courage? Respecting consent? I just came to see a singing crocodile.

As entertainment, Lyle, Lyle, Crocodile is largely toothless. Its harmless gags and mediocre music numbers lack any real bite. However, if you’re into wholesome, paint-by-numbers, family flicks that are dripping with earnestness, then you couldn’t do worse.

2.5/5 (And I gave the film extra points for Florida Gator references.) 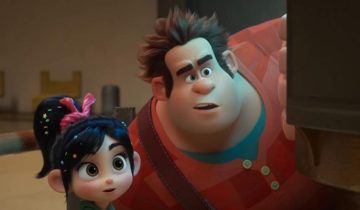