Based on real-life historical figures, The Woman King is a visually, culturally, and thematically stunning film.

Set in the 1800s, The Woman King takes us beyond the castle gates of the West African kingdom of Dahomey. Viola Davis stars as Nanisca, general of the all-female Agojie warriors of the Dahomey tribe who vow to serve their people and protect their King Ghezo (John Boyega). The Agojie can take no husband and start no family, and Dahomey villagers are prohibited from looking at the King’s warriors.

In an action-packed opening, Nanisca leads the Agojie into an ambush the men of the Oyo tribe — a ruthless group known for abducting Africans and selling them off to foreigners at a nearby slavers’ bay. Oyo women are unharmed in the battle, showing how dangerous but merciful the Agojie warriors can be. During the charge and rescue of the stolen women, we meet many of the film’s supporting characters including Lashana Lynch as scene-stealing warrior, Izogie.

Nawi (Thuso Mbedu) is a 19-year-old Dahomey girl who has always marched to the beat of her own drum. After ruining another of her parents’ attempt to wed her off, she is taken to the castle and surrendered to the King.

As the Agojie warriors return home from battle, Nawi sneaks a look at the Agojie in defiance of customs. This defiance will soon find Nawi butting heads with General Nanisca, who is determined to replenish her forces and spearheads the training of the next generation of Agojie. With nowhere else to turn, Nawi joins the Agojie in training.

While training, Nawi hears that King Ghezo is considering naming a co-ruler, a woman-king to uphold the tradition and teachings of the twin gods. The Agojie expect this honor to be bestowed upon Nanisca, for she has served the king for years and holds his ear. However, when slavers of the Oyo kingdom threaten the King and Dahomey’s way of life, a decision on whether to continue selling people or try a new trade divides the council. During the Oyo’s intrusion, Nanisca must come face to face with her past and either follow through with the King’s decision, or choose a different path for herself.

The Woman King’s core themes of strength, nurture, and overcoming your bonds are displayed throughout the movie. Director Gina Prince-Bythewood balances the fierceness of the (minimally bloody) battle scenes with the visually captivating colors of the kingdom of Dahomey. The royals’ bright attire helps the viewer separate them from the rest of the citizens, and the audience is enraptured in traditional African dance and customary war chants during the ceremony of the new Agojie.

Rated PG-13, The Woman King is an emotional, riveting, and historically epic journey into the Dahomey tribe. I found myself connecting with characters in the movie and cheering during their victories, whether personal or as a tribe. 4/5 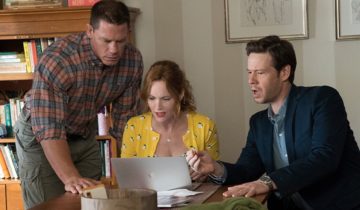