Black Adam delivers an edgier, action-packed jolt that aspires to rock and reignite the DCEU, but ends up just bashing audiences with sameness.

New Line Cinema’s Black Adam stars Dwayne “The Rock” Johnson as Teth Adam, a Kahndaq slave from 2600 B.C. who is bestowed almighty powers from the gods. But after using them for vengeance, he becomes Black Adam and is imprisoned until inadvertently freed 5000 years later. The character’s origin triggers major Scorpion King/ The Mummy 2 flashbacks. But unlike those films, Black Adam’s CGI is way better.

Johnson has a history of playing mischievous demigods (You’re Welcome!), but in Black Adam, the megastar has to tone down his signature charm to play the serious and stoic antihero. The result is a more subdued performance from the action star than most audiences are used to.

The film is also ripe with back-to-back-to-back over-the-top, slow motion action scenes accompanied by hard hitting needle drops. From an explosive desert battle set to The Rolling Stones’ “Paint It Black” to another cued up to Kanye West’s “Power,” the film jumps from fight scene to fight scene until they all kind of blur together.

However, in each fight scene, Black Adam is merciless in his desire to up the body count. A fact that almost earned the film an R rating. Whether he’s electrocuting mercenaries, shoving grenades in soldiers’ mouths, or literally ripping dudes in half with his bare hands, Black Adam does. not. hold. back. This movie is a 13-year-old boy’s Apocalypse Now.

A passion project for Johnson that’s 15 years in the making, Black Adam would like to be a “Phase One” reset of the DCEU. However, it is actually a spinoff of the infinitely more fun and charming Shazam! (2019). That Zachary Levi-led DC superhero entry already has a sequel in the can, but was pushed back from the 2022 holiday season so Johnson could have breathing room to make his superhero movie debut. 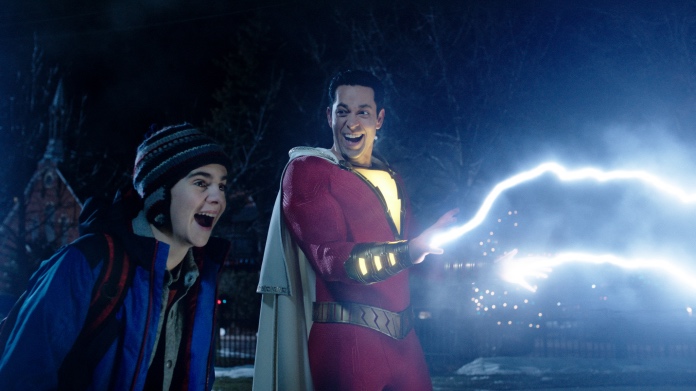 A highlight of Black Adam are the introductions of Pierce Brosnan’s Dr. Fate and Aldis Hodge’s Hawkman. The duo share enjoyable chemistry, swagger, and gravitas as they lead the Justice Society alongside newbie superheroes Atom Smasher (Noah Centineo) and Cyclone (Quintessa Swindell) to stop the destructive rage of the reawakened villain. The film also stars Sarah Shahi and Bodhi Sabongui as mother and son civilians, respectively, who awaken and guide Black Adam through the modern world, and Marwan Kenzari as the power-obsessed bad guy who has ancient beef with Teth Adam.

As for Johnson’s Black Adam, both the character and the film have trouble riding the line between hero and villain and the result is a flavorless mixture of moral grayness. The Jaume Collet-Serra-directed film would have been better served by a more tonally cohesive script as it jumps from brooding badassery to brazen buffoonery every five minutes.

The film would have you believe that sometimes the world needs something darker than a white knight, and while Black Adam is indeed a grittier, no holds barred take on Superman, I think the character should pick a lane and fully embrace his dark side for the next installment.

But would The Rock dare to alienate a portion of his fanbase and truly break bad on the big screen? He would if he could smell what he’s currently cooking. 2.5/5

Rated PG-13 with a running time of 2 hours and 4 minutes, Black Adam opens in theaters on October 21, 2022. Be sure to stay for the (largely spoiled) end credits scene.