The multi-talented Terry Fator – ventriloquist, singer, comedian and impressionist – wishes you a merry little Christmas the Las Vegas way. Terry Fator: The VOICE of Entertainment presents A Very Terry Christmas is an annual seasonal offering from the Las Vegas Strip headliner and America’s Got Talent winner, whose Christmas-themed performance celebrates the jolliest of holidays with comedy, singing, celebrity impersonations and ventriloquism, live nightly from the Terry Fator Theatre at The Mirage Hotel & Casino in Las Vegas. A Vegas hallmark since 2009, the award-winning show – with the Best of Las Vegas award winner securing such accolades as Best Show, Best Impressionist, and Best All-Around Performer – transforms into A Very Terry Christmas for the duration of the season, with the special edition of the show concluding on December 22nd.

Inspired by the great family television specials of the past, Fator’s evening gatherings are in the joyful spirit of the warm and cozy specials hosted by Andy “Mr. Christmas” Williams and Bing Crosby – with the Terry Fator Theatre’s homely, intimate stage taking on the role of the Fator family living room. Backing up our cordial host is the Terry Fator Band, who set the musical scene as guests enter from an ever-opening door, lovingly adorned with a wreathe and the accompanying running joke of a busted Santa Claus decoration who can only proclaim a singular “ho.” Fator bursts into a rendition of a Tony Bennett Christmas classic to initiate the merriment, with popular puppet Winston the Impersonating Turtle impressively dishing out Johnny Mathis’ “Sleigh Ride.”

Most of Fator’s characters can be summed up with a singular personality trait – Vikki “The Cougar,” visually reminiscent of Joan Rivers, offers only sex and cosmetic surgery jokes while cowboy and country legend Walter T. Airdale doles out westernisms – and while this sometimes narrowly limits the comedy to just one specific topic per character, the comedy is appropriately broad and plays to a wide audience. Fator never fails to give life to these characters, as justifiably shallow as they are, lovingly fooling you into believing that this is more than a puppet comprised of foam and felt.

Some are more wholesome, some less so – and while the show is family-friendly, there’s an undeniable bit of Vegas in several of Fator’s colorful puppet cast members. Thinly veiled innuendo plays to an aware adult audience, and zingers and punchlines range anywhere from safe and “Dad Joke” territory while spoken and sight gags leave younger viewers in blissful ignorance. The show is relatively tame – by Vegas standards – even with the inclusion of sex, drug and other adult-oriented jokes, but there’s a steady stream of amusing or outright laugh-out-loud comedy between the musical set pieces.

Like any holiday gathering, the introduction of politics can either spoil the fun or, at the very least, make you reach for the heaviest of eggnog – and even these festivities are nearly spoiled by a politicized detour featuring pupp-edent elect Trump (and an amusing hairpiece with a life of its own). Fator riffs on the 2016 election with glee – jokes lampoon both Clinton and Trump – with “Santa Trump is Comin’ to Town” standing as a good-natured, original song that brings big laughs, even if you thought a good-natured Christmas show would be your one break from political bombardment.

There’s little holiday-appropriate offerings in the sin-filled desert and adult playground that is Las Vegas, but Fator’s A Very Terry Christmas is a nice enough way to spend a chilly evening with friends and family. Like any good Christmas special, this Vegas show has a message – with Santa Claus himself espousing the one true meaning of Christmas, inspired by that lovable blockhead Charlie Brown – and Fator moved his audience with a sincerely expressed heartfelt message on behalf of charitable organizations Snowball Express and the Airpower Foundation, both of which honor and assist the heroic members of our nation’s military. 100% of Fator’s merchandise sales support veterans in need, and a showstopper of a tribute dedicated to these great men and women  gives A Very Terry Christmas its heart. Fator concludes a crowd-pleasing performance with “Have Yourself a Merry Little Christmas” – a duet between Kermit the Frog and Louie Armstrong – and the voice of entertainment sends his warmest wishes of good tidings and a cup of good cheer.

Terry Fator: The VOICE of Entertainment presents A Very Terry Christmas performs Monday – Thursday (with select Saturday shows) at 7:30 p.m. at The Mirage Hotel & Casino in Las Vegas until December 22nd. Learn about and support charitable organizations Snowball Express (serving the children of fallen military heroes) and the Airpower Foundation, a non-profit dedicated to supporting active duty, reserve and National Guard families, and which supports projects for children who have lost a parent in the war, wounded warriors and veterans.

REVIEW — "The Edge of Seventeen" 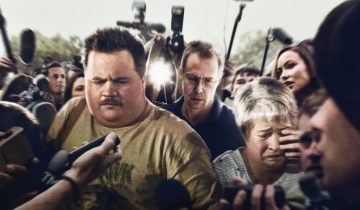