Under Further Review: An In-Depth Look at ANT-MAN

Marvel Studios, once upon a time “the little studio that could,” is now a giant sized behemoth in Hollywood. They’ve built their empire on the backs of former B-list superheroes – like Iron Man, Captain America, and Thor – turning them into A-list superheroes and box office juggernauts. Like Guardians of the Galaxy before it, many doubted Ant-Man: it sounded too silly, it sounded too out there, no one would take it seriously. It’s fitting, then, that Ant-Man is the spiritual sequel to Guardians of the Galaxy. Marvel took Ant-Man seriously, while never losing its trademark sense of humor. Ant-Man never hesitates to poke fun at itself: it’s having as much fun as you are.

Ant-Man isn’t about Scott Lang, a small time thief who is trying to get his life back on track so he can do right by his young daughter. It’s not about Hank Pym, mysterious super scientist, giving Scott an opportunity too big to pass up. Ant-Man, above all else, is about redemption. It’s about father and child relationships. It’s about starting small, and feeling smaller than the tiniest of ants… and becoming bigger and better than you could ever imagine.

It’s not just Ant-Man’s heart that sets it apart from the rest of the always competitive superhero pack: it’s the humor. Ant-Man is more of a comedy than a straight laced superhero tale. This is why Ant-Man works as well as it does: it’s many things. It’s a comedy movie. It’s a superhero movie. It’s a heist movie. Ant-Man has all these facets to it, and they blend together effortlessly, leaving us with a comic book movie that is as unique and as special as its titular hero.

If Ant-Man is a theme park ride, it’s not It’s A Small World. Instead, it’s the biggest, funnest ride in the park. Scott, played by funny man Paul Rudd, is the Robin Hood of his time: he’s a cat burglar, but he has a heart. After doing a stint in jail, Scott’s motivation to stick to the straight and narrow is clear: if he doesn’t, he’s restricted from seeing his daughter. Rudd, who co-wrote the film, put a lot of himself in Scott Lang. He’s funny, he’s charming, but you take him seriously. Without the right actor in the role, Ant-Man would have fallen apart. Paul Rudd grounds the film; he’s the everyman, he’s us. As Scott experiences these crazy, unbelievable things, he thinks some of it is awesome. And he thinks some of it is silly — like the name “Ant-Man,” or the utilization of ants as miniature workers and soldiers. But as Scott comes around, buying more and more into it, so do we: we can buy that this impossible thing is happening, and it’s not as silly as we first thought.

Without that likable, charming presence that Rudd exudes so effortlessly, Ant-Man would have had an even bigger ant-hill to climb. But like Chris Pratt before him, Paul Rudd sells the movie and carries it in a way that you want to root for this character. You laugh with him, you feel for him, you want to see him do better and succeed. That’s what Marvel does best: it brings its audience real, relatable characters that are reflections of us. They are who we could be, because they’re just like us. Even when the film gets serious, the film – and its protagonist – never get too serious. Scott knows the situation is serious and there’s a lot on the line, and time is taken to reflect on the mistakes of the past, but Rudd always knows the perfect time to interject with a hilarious quip to disarm us and make us laugh.

But like any film, the hero can’t do it all alone: he needs a supporting cast. The supporting cast is part of what makes Ant-Man so fun. Whether it’s the hilarious partner Luis (Michael Peña) or the beautiful and tough Hope (Evangeline Lilly), Ant-Man gets a little help from his friends. Scott’s crew, all with their own set of skills and personalities, add to the liveliness and fun of the film. Hope is an especially strong character; one who is even more proficient than Scott, the fish out of water who has to learn from Hope and her stern father, Hank Pym (Michael Douglas).

Michael Douglas is the latest in the line of prestigious actors who help add credence to to the amazing fantasy of the world that is the Marvel universe. Whether it be Robert Redford in Captain America: The Winter Soldier or Anthony Hopkins in the Thor films, these veteran and established actors add a certain pedigree to what some may deem “funny book movies.” Michael Douglas puts in a fantastic performance as the often-grumpy mentor; the old war horse who can’t go on adventures anymore, but can assist in the fight while handing the torch off to the new generation. Hank Pym, like Scott, is a man who has regrets in his past. And like Scott, they’re united in the goal to save the world, but more than that, they’re both on a journey to earn redemption in their daughter’s eyes.

When he shrinks, Ant-Man is the size of an ant, but he never loses his giant heart. It’s these human relationships that compose the heart of the film, and that’s part of why Ant-Man works so well: it gives us characters to care about. We like Scott, we root for him; we want to see him earn his redemption. We want to see the Hank and Hope relationship be repaired. These are emotional, invisible, and intimate goals that prevent Ant-Man from being just another empty, soulless blockbuster.

In addition to the human drama, Ant-Man has another thing going for it: the unique nature of its hero. Hollywood is the home of reboots, remakes, and eternal sequels, sure — but Ant-Man offers up a new plate to the table. Ant-Man is a beacon of creativity. You won’t find another superhero film like Ant-Man, a film that mixes all the originality of Honey, I Shrunk the Kids with the superhero journey of the original Iron Man. Ant-Man is unique because, like Spider-Man, he has a skill set all his own: no one has skills like Ant-Man. No one utilizes ants like Ant-Man. No one can go down a drain or leap through the keyhole in a door the way Ant-Man can. It’s this kind of fresh creativity that helps Ant-Man stand tall above its competition. It takes us to places that other superhero films just can’t go. And isn’t that what movies should be about? Showing us things we’ve never seen, or taking us to places we could never go? Ant-Man shows off a unique, incredible perspective not seen since the likes of A Bug’s Life.

Ant-Man isn’t perfect, of course – but I didn’t find any major faults with it. Like most Marvel movies, the villain – Yellowjacket – is nothing special. He serves as a good threat for our titular hero, however, which is what a comic book supervillain should do. He’s bad, he’s unhinged, he’s greedy, and he’ll hurt anyone who stands in his way – with only Ant-Man there to stop him. Marvel movies don’t put the villain first; they put the heroes first, and that’s part of why these movies work so well. If my biggest complaint with your movie is that the villain wasn’t super badass? That’s a good movie, and one I’ll return to time and time again.

Ant-Man is smaller in scale than its predecessor, Avengers: Age of Ultron, and that’s okay: not every Marvel movie needs to be a huge, global adventure. Some can be intimate and smaller in scope like Ant-Man and be better off for it. If A Bug’s Life and Iron Man had a baby, that baby would be Ant-Man: a hilarious, action-packed, heart filled adventure. Ant-Man made his first comic book appearance in Tales to Astonish. Ant-Man makes his first appearance in a movie that astonishes every small and big step of the way.

I’m all about movie news, movie reviews, and writing about the movies I see. You can follow me on Twitter at @SinCityCam. 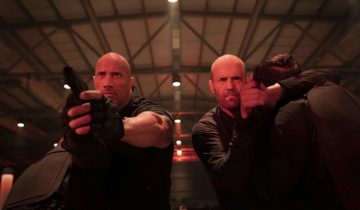