“Unfinished Business” is just another comedy. It’s what we call “A Moments Flick.” It has its moments, but as a whole it isn’t that good. From start to finish there are plenty of laughs, sure, but there are also offensive characters/stereotypes that are relied on too heavily for gags, a vain attempt to add substance to the story through a weak subplot involving children, and a misuse of some real talent. As a whole this is another disappointing entry to add to Vince Vaughn’s ever growing list of duds.

Since this is meant to be a comedy we can talk about that first. From the start we are introduced to our three main characters, and yes some hilarity ensues. The three leads, Vince Vaughn, Dave Franco, and Tom Wilkinson, are never really given much to help them bond and create chemistry. Instead we are just given moments where each character gets a chance to do something funny, and between these moments are lulls where you are awkwardly waiting for the next laugh. Dave Franco has one of the most offensive characters in recently film history as he plays a young man with special needs, they go so far as to talk about the group home he lives in (and show his roommates later in the story), but Franco pushed it a little too far. Robert Downey Jr. warned in “Tropic Thunder” that you should never go full retard, but that’s just what happened here, and it was done intentionally and for laughs, which I’m not OK with.

As mentioned above the cast lacks any real chemistry, and they aren’t given a whole lot to do. Between the gags, that work well and are funny, we are left twiddling our thumbs while the writers try to create this overly complicated story involving bullying (funny since they are making fun of a handicapped person the whole film), and you’re left wondering why anyone even wasted their time here. Tom Wilkinson had a real chance to step outside his comfort zone, dramas and light comedies, and step into a raunchy R-rated comedy, but the writers rarely give him a chance. There are only two scenes in particular that he got to do something that warranted him signing onto this. Add to this that Nick Frost, the comedic genius that he is, was relegated to a bit part, and while it had a few laughs it was just a misuse of his potential. As a whole “Unfinished Business” would have been a LOT funnier had they excised Vince Vaughn’s character, and all the strings attached to his story, and instead filled it with the rest of the cast.

While this comedy had some funny moments its vain attempt at substance and heart, all the while being offensive and hypocritical of the statement they are trying to make, really hold it back. Incredible casting potential is squandered, and even James Marsden, who proved how hilarious he could be in “Sex Drive,” isn’t given a chance to do anything remotely funny. I feel like Vince Vaughn had more involvement behind-the-scenes then he should have, because had I been director I would have realized it was him, and his story, that was killing the tone and momentum of the flick. The moments of hilarity are not worth the time it takes to get from laugh to laugh, and the uncomfortable feeling you get laughing at Dave Franco’s offensive performance makes you question how you spend your time. 2/5 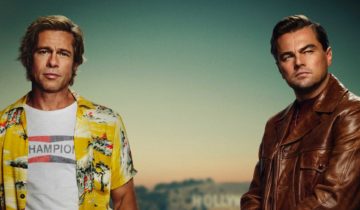 The Critticks Podcast Ep. 6 – Once Upon a Time in Hollywood (w/ Devin Ramey and Jackson Wise)