“Everly” is the kick-ass action movie you didn’t know you needed in your life. They always say, “No guts. No glory.” but in this it’s clear that they meant it. This is a brutal piece where the female lead takes a beating as bad as she gives out, but her motivation speaks wonders to the willpower of women. This is one of the first films in a long time to show that a woman doesn’t need super powers (“Lucy” and “Resident Evil”) or special spy training (“The Avengers”) to be as bad-ass as the boys.

The highest praises should be sang for Salma Hayek, who hasn’t had a real action role since “Bandidas,” and it’s great to see her as something other than eye-candy. While she isn’t given much to work with in terms of dramatic material to show her acting chops, she still brings a lot of heart and soul to this character fighting for the life of her daughter. While she considers her life expendable, she fights tooth and nail for the chance to ensure her daughter doesn’t end up in the same position as her, and she brings a motherly attitude to the role that a lot of actresses wouldn’t be able to. Despite no explanation as to why/how she is able to wield every weapon she touches, it’s still believable that she would, at least try to, do these things, and that adds a gripping element to the flick that keeps you from looking away.

The action scenes are what really drive this forward. While some are over-the-top, they are all choreographed in a way that makes the action visible to audiences, and that’s important. Blood and guts galore make this any action junkie’s dream come true, but a shakey camera would have ruined that. A hot mammasita wielding a big ass machine gun? YES PLEASE! I think what makes this even better is they don’t over-sexualize her and the action (unlike Monica Bellucci in “Shoot ‘Em Up”), and turn her into a piece of meat for guys to gawk at (with exception to one butt-shot they just had to sneak in), but at the same time she still has her usual beautiful Hayek looks while shedding blood all over her apartment. It’s an excellent mix of bad-ass to beauty. She is a strong female, though put through some sexual situations (the sounds in the opening credits, and again shortly later on, are uncomfortable to listen to), fighting for a reason, and women everywhere can respond positively to that. It should be noted that the action is very hard R, and resembles that of Japanese style action films (a la “The Raid”).

The writing is probably the weakest and strongest part of the whole thing. They had just enough back story, in just the right places, to help paint this picture as to where our lead came from, and her circumstances. However, they didn’t explain how Hayek’s character was able to do all the things she does, why the main baddie is just throwing dozens of lives at her instead of bringing out the big guns, and a few other continuity/plot issues. These are almost non-issues though as they don’t take away from the enjoyment of this bloody good time. Although, we could have used a little more development of some of the other characters so that they would have a bigger impact on the finale. I will give them a lot of credit for being able to shove as much as they did into a short run time with very very few locations (it all takes place in one building).

“Everly” is a bloody good time, but the hard-R rating might be a turn off to some. I really loved Hayek in this role, and I think we need more strong female characters like this, but I do wish there were other performances worth talking about. The bad-ass choreography, simple story, and compressed run time all contribute to a higher level of enjoyment as the movie never wears out its welcome. The realistic nature of the plot makes this is a must-see for all action junkies! 4/5 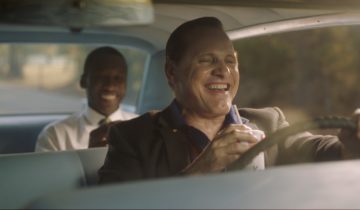