I have three Maria’s!

The Magnificent Seven is directed by Antoine Fuqua and written by Nic Pizzolatto, and has a cast featuring: Denzel Washington, Chris Pratt, Ethan Hawke, Vincent D’Onofrio, Byung-hun Lee, Manuel Garcia-Rulfo, Martin Sensmeier, Haley Bennett, and Peter Sarsgaard. I think I covered all the bases. It tells the story of seven gun men in the old west who are recruited to help a poor town, named Rose Creek, that has been taken over by savage thieves.  This is a tale so timeless it has already been told twice to great results, so how’d it pan out this time? The Magnificent Seven is an endlessly fun, exciting, suspenseful, Western that I loved every single second of despite the very few issues I had with it. I almost cried.

Antoine Fuqua is a very distinguished director known for things like Training Day, Olympus Has Fallen, and most recently Southpaw. He is a very diverse, and this was his first crack at a western and he certainly succeeded. His direction here is simply put excellent. His strong point is performances and that certainly shows. This is definitely one of his better efforts, and is probably his most fun. Every scene is oozing with energy and intensity, and the action scenes are awe inspiring; Some of the best I’ve ever seen. In an era of action movies full of cuts and shaky came seeing an action scene full of long takes, choreography, and constant action almost brought a tear to my eye. Antoine Fuqua had a hold on this, and directed the hell out of it.

Now, onto the cast. Oh my God, they were great. The obvious stand-outs are Denzel Washington and Chris Pratt. I was absolutely captivated whenever these two gentlemen are on screen. They work so well in this, and my worries about Chris Pratt seeming out of place were put to rest after his first scene. Saying Denzel was good in an Antoine Fuqua production is redundant at this point. He kills it as the lead, and really holds this together. The entirety of the cast works so well. While some get more screen time than others, they all add something to their character. Vincent D’Onofrio blew me away as I went from laughing at his character to absolutely loving him. Peter Sarsgaard is also terrific as the villain. He is very imitating, and was a great presence on screen. It’s rare that you find an ensemble as great as this, and everyone actually serves a real purpose.

The script is penned by Nic Pizzolatto, who created one of my favorite things in the world True Detective Season 1. So how does this compare? The script, while sloppy at times, gives the actors a lot to work with. I point to a scene between Denzel Washington and Peter Sarsgaard in a church that had me salivating to the point where I was genuinely upset when it had ended. Westerns are known for having great cinematography, and this one is no exception; it’s truly fantastic. Full of long takes and wide shots, the environments are beautiful and the action scenes look great. The score is also noteworthy enough to where I feel scenes wouldn’t have as much of an emotional impact as they already have without it. It also has great sound design, and that is very apparent in the multiple shootout scenes.

While this review, for the most part, has been overwhelmingly positive it’s important to note that this flick is not without its flaws. More time is given to some of the seven than the others, and while I loved the character I couldn’t tell you the Mexican’s name. It also happens to be a tad bit too long, and its final shootout, while glorious, drags on for a bit. Also, the way it actually concludes, like the way it cuts to black, is terrible. There is also some horrible CGI and out of place narration which left a bad taste in my mouth. Other than that I have noticed no other major flaws/issues. The Magnificent Seven starts off running, and never slows down. It is action packed, entertaining, emotional, and filled to the brim with fun. This is obviously a remake of the classic western of the same name, and while it may not be as good as it, or even as good as Seven Samurai, I don’t feel like wasting time on comparing the three. All of the three are different enough that while they are obviously telling the same basic story they all stand on their own. This version of the timeless tale is new, exciting, and fun, and isn’t that what every action flick needs to be? 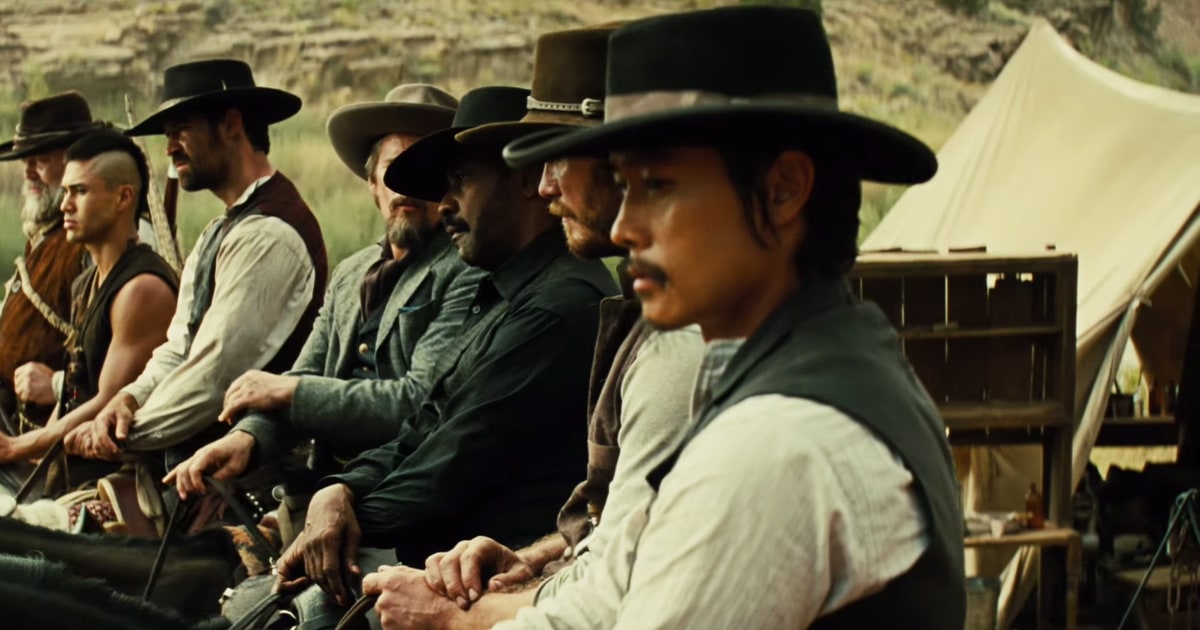 The Magnificent Seven is a respectful adaptation of a timeless tale. I think if you watch this forgetting the past two incarnations of the story you’ll have an absolute blast. It’s my favorite Western this year, sorry Hell or High Water, and while it’s not as good as other modern Westerns like The Hateful Eight or Django Unchained, it is definitely worth your time. 4.5/5