Home›Movies›REVIEW — “Sin City: A Dame to Kill For”
Movies

I can’t believe I waited almost 9 years for this. “Sin City: A Dame to Kill For” is the follow-up to 2005’s genre defining and visually stunning “Sin City.” The only thing the two have in common is tone, looks, and some characters.

This outing fails for a number of different reasons, but the main one is the writing. Robert Rodriguez and Frank Miller went from being excited fan boys with the first one to being just plain full of themselves this time around. They shoveled garbage on paper, and that’s exactly how it translated onto the screen. With exception to the main story-line, featuring Josh Brolin and Eva Green, everything else was poorly written and lacked substance.

Joseph Gordon-Levitt’s story-line, which I was enjoying until the end, ends up being completely useless to any other stories, and ends up being filler to help extend the flicks run-time. The way it ends, mixed with how Jessica Alba’s story ends moments later, completely invalidates its entire existence, and makes it a visually gorgeous waste of time. There were a few characters introduced in his story-line, that unless are intended to have a bigger presence in future flicks (weak writing), were completely unnecessary. Add to this that Alba’s story-line tone shifts drastically throughout, and turns from a story about depression, and dealing with loss, into a story about revenge without reason. It then ends in an anti-climactic fashion that doesn’t resolve any of the original issues presented.

The movie starts off the way everyone is wanting and expecting, with Marv kicking some serious ass, but then you might (I know I did) immediately notice Mickey Rourke looks different than he did in the first for no reason, and he is delivering his lines in a completely different way than he did the first time around. I know there was 9 years between films, but at least re-watch the first one to ensure the characters talk and LOOK the same! Add to this that there was a SLEW of continuity issues between the first and second film that are just lazy mistakes. I understood the timelines perfectly fine, but in order to get away with certain things the writer/director opted to pretend certain things from the first film didn’t happen instead of taking the time to work around it.

The cast was, of course, incredible. While some of them didn’t get too much to do, like Christopher Lloyd, others really owned their roles. Brolin nails it as pre-Clive Owen Dwight, and Eva Green was PERFECT for the role of Ava Lord (the dame to kill for). Mickey Rourke brought the pain as usual, and Dennis Haysbert did a great job stepping into the late Michael Clarke Duncan’s shoes as Manute. Joseph Gordon-Levitt played probably the most interesting character, but Powers Boothe played the most menacing. I can’t complain at all about the casting as it was one of the few things they did right.

They did an amazing job capturing the overall feel of the first film as the visuals were incredible again, and the music was equally as impressive. The noir feel of the story really sets it apart from other genre shtick as of late, but it isn’t enough to save this dreck. The action even becomes a little dull, repetitive, and unoriginal after a while making people wonder when it all will end. Even ample footage of a naked and gorgeous Eva Green gets played out after a while.

“Sin City: A Dame to Kill For” is an abysmal follow-up to the impressive “Sin City.” Those involved creatively have made this look like it was something they just did for the money. Nine years have passed, and one would have expected them to have put at least some time into making the story cohesive, and the continuity flow correctly. Weak writing/direction and dull repetitive action are what brings this sequel down. The amazing cast, one proper story-line, and excellent feel/visuals is not enough to save this. 2.5/5

GIVEAWAY — "As Above So Below" Prize Pack 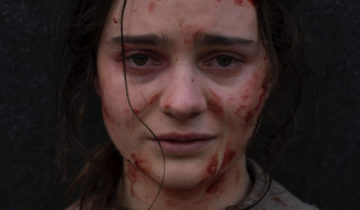