From sketch comedy genius to horror movie maestro, writer, producer, and director Jordan Peele is back with his anticipated third film Nope.

Nope follows Haywood siblings OJ (Daniel Kaluuya) and his younger sister Em (Keke Palmer) as they attempt to get back on their feet following a tragedy and fight to keep their family legacy in business. Their family business is Haywood Hollywood Horses, a fictional horse wrangling/rental company for film and television productions with a history in motion pictures. Six months after an accident, hardworking OJ and outgoing Em are down on their luck, but it’s time to stop grieving and earn money with their prize horses.

However, the two leads have contrasting personalities that sabotage their ability to gain respect in the industry and maintain gigs. OJ is a reserved, serious cowboy, while Em is a charismatic, spontaneous hustler. Palmer and Kaluuya’s comedic on-screen dynamic is juxtaposed by Peele to break up the movie’s more surprisingly intense and dramatic scenes.

Quickly we find out that the siblings are not as close as they once were. One night when their horse Ghost appears in the arena, OJ and Em experience a power loss as the storm rolls in. Before you know it, Ghost is running towards the storm and a spine-tingling scream fills the air and OJ sees something flying overhead. What is causing the outage and what happened to their horse?

Fueled with a new purpose and plan to make some money, the Haywood’s seek to do the impossible… capture the perfect shot, “The Oprah Shot.” Whatever is disturbing their small town in California won’t stay hidden for long and the Haywood’s are ready to expose it. With the help of new friends, the Haywood’s take matters into their own hands.

The movie is broken into chapters that often shift between the present and the past to reveal character backstories and reinforce the message of the film, which is the dangers of mankind’s obsession with spectacles and how often the subject of such spectacle is chewed up and spit out by the industry. For example, Steven Yeun’s character is a former child actor from the fictional TV sitcom “Gordy’s Home” that centers around a family that adopts a chimp. However, the brief series ends in tragedy after the wild animal mauls some of the cast in a grisly, yet infamous, episode.

Nope was made to watch on IMAX screens, which provides an extra jolt during suspenseful and exhilarating scenes. Peele takes another unconventional approach at large-scale original storytelling, and it pays off. Peele’s script hilariously reflects how ordinary people would realistically react to extraordinary circumstances. Most would say “Nope” and quietly back away, some would whip out their smartphone and start recording, while others would expose their inner heroism and jump into action.

Prepare for a psychologically intense film that puts an original spin on the extraterrestrial and will have you on the edge of your seat questioning exactly what it is that you are seeing. Nope is rated R for language throughout and some violence/bloody images and also stars Steven Yeun, Brandon Perea, Keith David, and Michael Wincott. 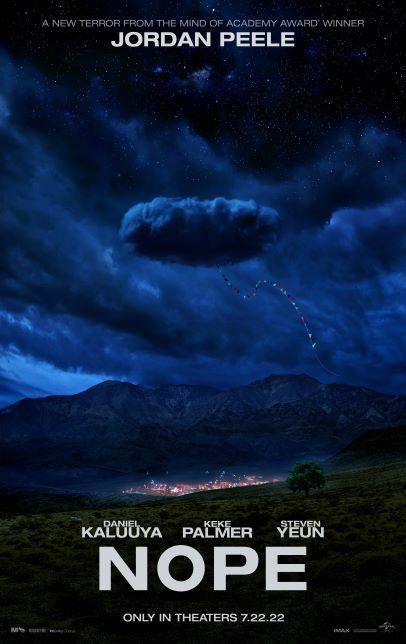