Magic Mike’s second coming may end up as one of the funniest comedies of 2015.

Steven Soderbergh’s 2012 “Magic Mike” was loosely based on Channing Tatum’s early days as a male exotic dancer and featured equal parts of humor and drama into a moderately entertaining film. XXL is a entirely different beast, a much more fun beast.

Mike (Channing Tatum) has his furniture business, and even an employee!  But life is difficult and in a hilarious impromptu dance in his workshop we can see he misses the fun he used to have with his fellow Kings of Tampa.   As fate would have it, the remaining Kings pass through town on their way to a stripper convention in Myrtle Beach.  Their club has been closed, their manager gone with all the money, they want to go out with a bang.

It doesn’t take much convincing for Mike to join the ragtag group of man-children on their road trip.  It’s at this point “XXL” reveals itself for what it is, a raunchy update to the Hope & Crosby Road Movies.  The story has a simple framework: A bromance between a group of guys who, constantly ribbing each other, getting into and out of various shenanigans, while incorporating a great soundtrack.   (If “DOPE” has the best soundtrack of the year, “XXL” is a close second.)

There’s not much else in the way of plot.  It’s just a series of locations and events on the way to their final goal. If it has any flaws it’s when it veers from this simple storyline for a handful of more serious elements.  One such moment is the mid-movie lull when they visit Rome’s (Jada Pinkett Smith) rather unique Savannah club.  The sequence is too long and introduces the notion that Male Strippers exist to to provide a needed service: helping women’s self-esteem.  This notion is both sexist and anti-feminist to say the least.  Thankfully these fleeting moments of self-justification are few and far between.

When the end credits role, we are still grinning from the fun times we’ve shared with these guys.  These characters have such great chemistry that it would be fun to see them in a third movie, although another stripper storyline is unlikely.  Perhaps they could be re-imagined into other genres, similar to what has kept “The Fast & the Furious” going strong.  “Magic Mike:Dance or Die”, anyone?  Anyone?

REVIEW — "Me and Earl and the Dying Girl" 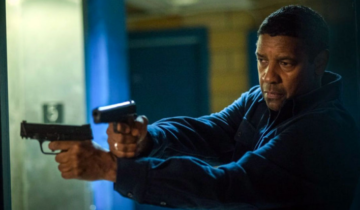