Last Flag Flying is the latest entry into cinema by acclaimed director Richard Linklater. The film is based on the novel by Darryl Ponicsan (who also co-wrote the screenplay with Linklater) with the same name. It’s worth mentioning that Last Flag Flying is technically a sequel to a Jack Nicholson led The Last Detail which came out back in 1973. Fast forward to 2003, Larry “Doc” Shepard (Steve Carrel) starts gathering his old Vietnam buddies Sal Nealon (Bryan Cranston) and Richard Mueller (Laurence Fishburne). However, their reunion comes with somber tidings because Doc’s son has tragically died serving in Iraq. The boys then embark on a trip together to support Doc as he buries his son. Choosing to forgo burying his son in the prestigious Arlington Cemetary for Doc’s home in New Hampshire, the men undertake an intrinsic journey through the East Coast that forces them to deal with their places in life in both past and present. Last Flag Flying is quite emotionally demanding, which you can mainly attribute to one thing, the acting. This is for sure the best ensemble performance of 2017. Carrel, Cranston, and Fishburne all deliver Oscar-caliber performances that truly affect the audience in such a profound way. Carrel truly embodies his character of Doc by delivering a performance so human and so believable that you cannot help but be moved by his extremely emotionally trying motive. Yet Carrel doesn’t let drama completely take hold of him, he injects his signature sense of wit into his character while still staying within the bounds of reason. This skill of balancing comedy and drama doesn’t just apply to Carrel either, Cranston also delivers a powerhouse performance as Sal. Sal is your typical never-say-die Veteran who is too headstrong for his own good. Sal is pitted against Mueller (Fishburne) because they are opposites. Mueller after the war abandoned his party animal lifestyle to become a Reverend and decided to settle down with his wife, the antithesis of how Sal ended up. This dynamic is so well played, the bickering between the characters becomes so much more. You really understand what the movie is trying to say purely through the performances. I would expect to hear maybe one or two of the actors to get tapped for a lot of nominations come awards season. 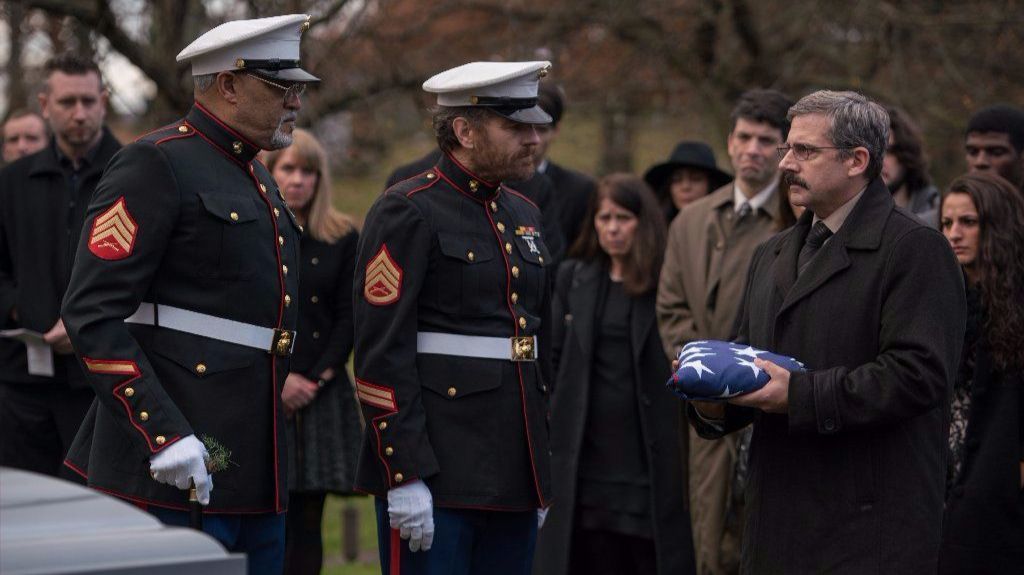 Richard Linklater also does a tremendous job handling the film. The signature laid-back tone he uses for storytelling is in full swing for his new feature. He truly makes the viewer feel as if they’re watching these characters exist in their own world while it becomes less of a movie and more just watching them handle such a heavy subject. Linklater doesn’t let the somber tone of the movie run rampant either, he inserts amazing bouts of humor throughout the runtime that makes Last Flag Flying a very enjoyable ride.  The writing from Linklater also meets expectations, yet doesn’t exceed them. Some of the script felt a tad static as the pacing of the film is admittedly slower at some parts. It also feels as though some scenes happen just to serve a purpose rather than serving the story. That being said, the script is still tremendous. It is a superb dramedy that effectively uses the weight of its story to really reach the audience in a way that can affect them at an individual level. Everybody comes into the theater carrying different experiences and emotions, and because of this nobody will leave affected in the same way. The themes and thoughts of the movie hit you in a way that almost feels tailored to your life’s happenings, which leaves it up to the viewer to interpret what they feel is the true meaning of the story.

All in all, Last Flag Flying is a relentlessly heart-warming dramedy that deals with deep themes in a marvelous fashion. I feel like some people might be turned off because of the subject matter or maybe they don’t wanna see it because it’s not a necessarily huge movie. Wrong. Go see this movie, cry a little, laugh a little, and enjoy how great it is. 4.5/5