“Don’t Breathe” is a pretty unique idea, and it was executed well. With a strong performance from Stephen Lang, and a decent enough ‘supporting’ cast, we are treated to a visceral experience that truly strikes fear deep inside of the audience. While there are the ‘jump from your seat’ scares, the way this was crafted messes with you mentally and emotionally; That’s what good Horror does. Director Fede Alvarez had me unconvinced with his gory remake of “Evil Dead,” as jump scares with intensely real grotesqueness doesn’t move me, but he truly struck a chord with me on this one.

The story starts off simple enough. We are introduced to our three ‘leads’ that rob houses in a destitute Detroit. They never steal more than $10,000 worth of goods, no cash, in order to mitigate the punishment if they get caught. However, familial issues pushes them into a ‘one last heist’ situation which leads them to target a blind war vet. He struck it rich in a settlement with an affluent young woman that caused the death of his daughter. BIG MISTAKE. What starts off as a by-the-numbers robbery turns into a night of horrors at the crew are confronted by the sick and twisted war vet. On some level I think there’s a hidden message in here about mixing PTSD with grief, as they pan over his war photos multiple times. Regardless, Stephen Lang CRUSHED this role, and makes it ever apparent that he was MEANT to play Cable in “Deadpool 2.” He carries some serious attitude, and has a commanding and intimidating screen presence. The rest of the cast did well, but their characters were very generic (some would say cliché). It was obvious the director/writer was focusing his efforts on the atmosphere and tone as opposed to developing their characters. Essentially they are all bad guys in this situation, but they have different reasons for being that way.

The filmmaker did an amazing job crafting a truly terrifying atmosphere and setting. The environment was very believable for this kind of character (Lang’s), and was really creepy. Everything was old and weathered on the inside despite the house appearing fine on the outside…definitely a double meaning there relating to our baddie. Inches of dust and massive disrepair inside show the signs of neglect that can be found in the home of someone grieving a major loss, and the fact that our first time encountering him is after he has fallen asleep listening to videos of his daughter as a child. Like a fine Tiramasu there are layers to “Don’t Breathe” you just don’t get in typical horror. Creaking doors and floorboards, chains rattling, and stuff everywhere turn this seemingly normal home into a house of horrors.

The fast pace really keeps things tense, and keeps audience members gripping their seats. From the moment we are introduced to Lang until the end it’s a non-stop thrill ride of Cat-and-Mouse, and throwing the characters, and audience, into total darkness truly elevated the experience. The third act twist was absolutely shocking, and no one saw it coming. It was SO intense that people were squirming, and some were so uncomfortable with the revelation and scene that they felt like they needed to leave. It wasn’t a graphic scene, but psychologically disturbing. Just one more reason to love this flick!

“Don’t Breathe” is the must-see horror/thriller for post-summer 2016. While the story and characters aren’t that complex, somewhat generic until the final act, the environment/atmosphere are truly terrifying, and the psychological tom-fuc*ery at work here is really intense. The scares are genuine, and not just “A cat popped up out of nowhere.” The filmmaker earns the audience’s reaction through tonality and pacing, and it makes for a pretty unique experience. I can’t recommend “Don’t Breathe” enough. 4.5/5 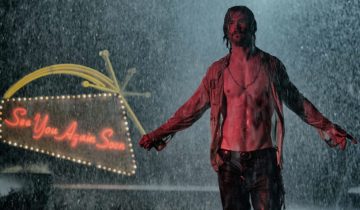