The absolutely immersive Avatar: The Way of Water drops you in the deep end of mind-blowing visuals and emotionally epic storytelling and seldom comes up for air.

In Avatar: The Way of Water, director James Cameron invites audiences to dive back in to the world of Pandora. More than 10 years have passed since the events of the first film, but the film brings us up to speed like no time has passed at all. We are quickly re-introduced to familiar (blue) faces, and meet new characters and a few resurrected ones along the way.

Jake Sully (Sam Worthington) and Neytiri (Zoe Saldaña) are now tribal leaders and parents to a growing brood of Na’vi children with human traits (like five-fingered hands… and Brooklyn accents?).

Among them is free-spirited adopted daughter Kiri (Sigourney Weaver), who is the result of a mysterious immaculate conception by comatose Dr. Grace (also Sigourney Weaver) and Pandora nature goddess Eywa, and “Spider” (Jack Champion), an abandoned human boy who has integrated himself into their Na’vi tribe.

The love and stress that tests their familial bonds feels both real and relatable. Jake and Neytiri are parents with responsibilities and too few nights to themselves. However, their past soon comes back to haunt them when the sky people suddenly return with advanced reinforcements led by a back-up avatar of Colonel Miles Quaritch (Stephen Lang), the deceased villain of the first Avatar. He’s on a mission for revenge, and on the hunt for Jake and his family.

Fearing for their safety, the Sullys escape across Pandora to a remote chain of islands where they are reluctantly granted sanctuary by Tonowari (Cliff Curtis) and Ronal (Kate Winslet), leaders of an aquatic tribe of finned Na’vi.

To stick together, the Sullys must make new alliances and adapt to the water that surrounds them. It is here where they must make their stand against the Quaritch’s heartless and relentless forces in a dramatic and action-packed final battle.

In this first Avatar sequel, the way of water is said to have no beginning and no end. With 13 years having passed since its first installment (2009’s box-office dominating Avatar) and no less than three more sequels on the horizon, both of those statements appear to be true, the film’s three-hour running time, notwithstanding. Indeed, Avatar and its characters are back and here to stay.

Which is good, because James Cameron doesn’t make bad films (see Aliens, The Terminator, True Lies). And, clearly, the director of Titanic and The Abyss knows a thing or two about the way of water. With Avatar: The Way of Water, he delivers yet another grand-scale masterpiece that has absolutely been worth the wait.

The film’s life-like CGI is another technical achievement for the maestro, and Cameron’s immersive world building is unlike anything ever put on film. Pandora is a rich, lush world that the director has only begun to explore. However, with the land, sky, and, now, sea of Pandora introduced, where will Cameron take us next? 4.5/5

NYFF REVIEW - "Bones and All"

REVIEW — "Knock at the Cabin” 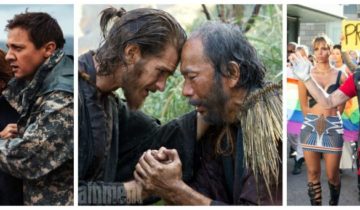