Officially described as an “unprecedented cinematic journey ten years in the making,” Infinity War is Marvel Studios’ most ambitious undertaking yet: 10 years, 18 movies, and more than $15 billion in worldwide box office to date has all been leading to this, the ultimate crossover bringing together (almost) all of the shared Marvel Cinematic Universe.

“There was an idea to bring together a group of remarkable people to see if we could become something more,”  so the mantra goes, “so when they needed us, we could fight the battles that they never could.”

Six years ago, those remarkable people assembled for the first time to combat the invading alien forces of Thanos (Josh Brolin), who covets the six infinitely powerful Infinity Stones — stones as old as the universe itself that, when brought together, grant their possessor unlimited power and abilities.

The purple warmonger’s goal is to wipe out half of all life in the universe in the name of balance and course correction, and it will take the universe’s biggest heroes — the stars of Marvel’s biggest franchises — to thwart the mad Titan’s cataclysmic plans.

With the Avengers splintered and disbanded after the events of Captain America: Civil War, an anxiety and PTSD-ridden Tony Stark (Robert Downey Jr.) is recruited by sorcerer supreme Doctor Strange (Benedict Cumberbatch) in the name of protecting the entirety of existence.

Bruce Banner (Mark Ruffalo) has been sent to Earth with a grave warning, alerting the heroes of the unparalleled threat headed their way, a threat that sends Asgardian Avenger Thor (Chris Hemsworth) across the stars in search of a Thanos-killing weapon.

An uncompromising Captain America (Chris Evans) is drawn out of the shadows with his team of secret Avengers (Scarlett Johansson, Anthony Mackie), who re-form their own task force with old allies Scarlet Witch (Elizabeth Olsen) and War Machine (Don Cheadle) in order to devise a plan of attack centered around the Infinity Stone housed in the head of synthetic android Vision (Paul Bettany).

While Tony Stark’s Iron Man partners with a ride along Spider-Man (Tom Holland) and half of the Guardians of the Galaxy (Chris Pratt, Pom Klementieff, Dave Bautista), Thor’s journey takes him to a mythical pocket of the universe alongside newfound allies Rocket Raccoon (voice of Bradley Cooper) and a video game-obsessed adolescent Groot (voice of Vin Diesel).

The heroes’ journeys take them in separate but similar directions as all roads lead to Thanos, with the formerly reclusive and technologically advanced nation of Wakanda operating as the end of the line as the Avengers recruit King T’Challa (Chadwick Boseman), a.k.a. the Black Panther, and allies (Danai Gurira, Letitia Wright, and Winston Duke) to their cause as the warriors face a threat too great for any one hero to defeat alone. 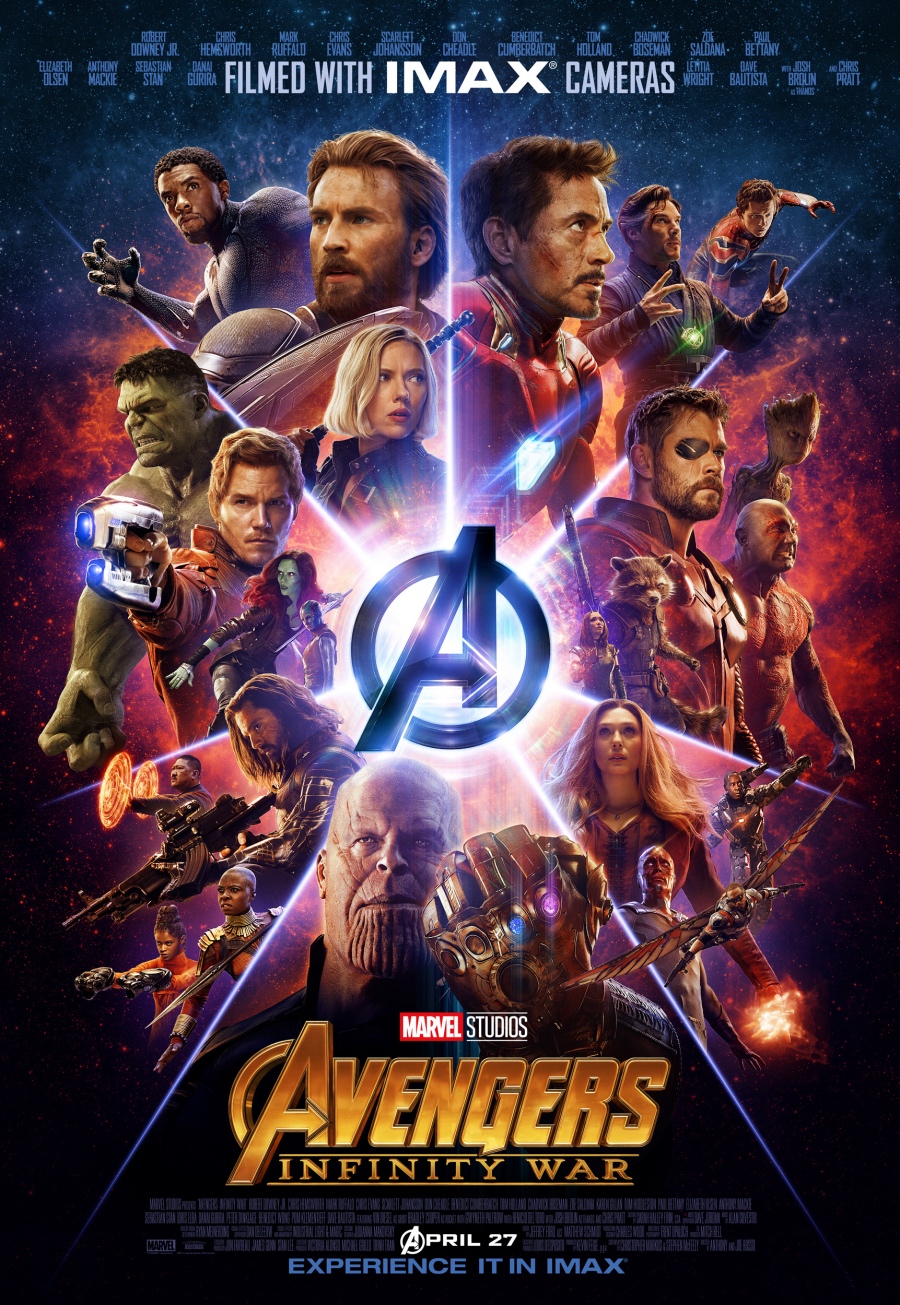 Marvel pulls no punches come Infinity War: the Disney-owned studio’s trademark sense of humor is present and the sharpest it’s ever been, but this war finds the Marvel Cinematic Universe with a more dire and serious tone than ever before.

For the first time, the gloves — or the golden-clad metal gauntlet — are off, and no one feels safe.

Without ignoring the already announced slate of films being readied by Marvel Studios past the still untitled Avengers 4 and beyond — the number of characters confirmed to return after its May 3, 2019 release date is small — introduced is an underlying anxiousness never before seen in any Marvel movie, or superhero movie, whose titular superheroes are often considered safe and guaranteed to fight another day.

That’s not the case come Infinity War, which boasts a body count dwarfing that of any installment of masked killers Michael Myers or Jason Voorhees; no, there are “no resurrections this time,” warns Thanos. This time, Marvel is playing for keeps — even if Marvel Comics storylines Infinity Gauntlet and Infinity War hint at possible returns for characters who meet their brutal and merciless ends in Marvel’s superhero epic.

Avengers: Infinity War is half superhero summer tentpole and half horror movie, injecting its unsuspecting moviegoers with an unrelenting sense of dread permeating throughout the film starting with its ruthless opening minutes.

Audiences — especially longtime fans of both the Marvel comic book characters and their A-list, live-action movie counterparts — will grip their seats, grind their teeth, and brace for the worst as they wait in breathless anticipation of what unforgiving fate awaits their favorite characters.

If you’re invested, and more so if you’ve been with the MCU since its inception with 2008’s Iron Man, Infinity War is intense and horrific.

“It will keep you on the edge of your seat” may be damned cliché, but also never more true.

Its handling of the characters, many of whom are meeting and interacting for the first time, is flawless and among the biggest draws of the film, bringing that same level of magic that enthralled so many with Marvel’s first major crossover: 2012’s The Avengers.

The cruelest blow delivered by Infinity War comes in its somber final moments, which is surely soon to overtake the infamous closing moments of Star Wars: The Empire Strikes Back as maybe the biggest cliffhanger in movie history.

The stunned silence in the room was palpable, and the horror and disbelief was just as conspicuous — as the first chapter of the first ten years of the Marvel Cinematic Universe comes to a close, it doesn’t go quietly. Destiny doesn’t arrive with a whimper, but with a hulking roar.

Avengers: Infinity War is superhero movie perfection, boasting the greatest assemblage of comic book heroes and stars alike alongside a complex and fascinating villain in Thanos, who has finally unseated reigning champion the Joker (The Dark Knight‘s Heath Ledger) as the superhero genre’s ultimate villain.