Captain America: Civil War illustrates the fact that Marvel Studios may not be perfect, but they are the still the safest hands for superhero blockbusters. Although this film suffers from pacing issues and a few underwhelming creative decisions, it benefits from strong performances, great comedic relief, and thrilling action sequences. 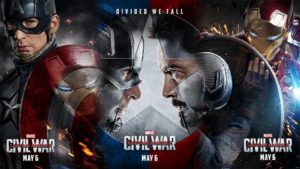 Captain America: Civil War is a sequel to every installment of the Marvel Cinematic Universe. It also sets up Black Panther, Spider-Man: Homecoming, and Avengers: Infinity War – Parts I & II. Screenwriters Christopher Markus and Stephen McFeely faced the Sisyphean task of writing a coherent film that managed to fulfill all of the aforementioned functions. According to IMDb, this film’s plot is: “Political interference in the Avengers’ activities causes a rift between former allies Captain America and Iron Man.”

Unlike the screenwriters of previous Avengers films, Markus and McFeely boldly choose to deal with the consequences of heroism. This is mainly handled through footage that shows the deaths and injuries sustained by various civilians during the events of The Avengers, Captain America: Civil War, and Avengers: Age of Ultron. Joe and Anthony Russo carefully frame each instance of violence upon civilians to convey what happens without resorting to the perpetually dark tone of Batman v Superman: Dawn of Justice.

Although Captain America: Civil War is among the finest installments of the Marvel Cinematic Universe, the pacing and tone during the first hour are not as strong as that of the rest of the film. Prior to the introduction of the newest Spider-Man, the tone of this film is so dark that most of the one-liners are only mildly humorous. The comedy and tone of this film are weighed down by the sheer volume of storylines that Markus and McFeely cover.

The fact that William Hurt’s Secretary of State Thaddeus Ross, Jeremy Renner’s Hawkeye, and Frank Grillo’s Crossbones are given little-to-no character development proves that Captain America: Civil War strives to cover too many plot lines and characters. All three of these characters are one-dimensional and underutilized. In particular, Frank Grillo’s brief appearance as Crossbones is underwhelming. Because he survived Captain America knocking down a building upon him, his battle with Captain America should have been epic and amazing. Although the action sequence in which they fight is well-choreographed and tense, its brevity prevents it from being a worthy pay-off to Brock Rumlow’s established character arc in Captain America: The Winter Soldier.

A tragic situation is carefully crafted into the Avengers battle at the airport, which would have been a memorable and effective way to kill one of them. Unfortunately, because Marvel Studios refuses to kill likeable characters – other than Quicksilver in Avengers: Age of Ultron – the dramatic impact of this epic battle is lessened. Also, the Avenger in question is injured permanently. By keeping every likeable character alive, Marvel Studios is setting themselves up for future team-up films with even more characters and not enough screentime to develop them all adequately.

One of this film’s greatest strengths is Tom Holland’s take on Spider-Man/Peter Parker. Because Holland is convincingly humble, intelligent, and mouthy, he is perfect for this role. Thanks to sharply written one-liners and Holland’s strong performance, Spider-Man is a welcome source of comedic relief. This new Spider-Man makes references to films such as The Empire Strikes Back and reacts to the astonishing powers of the various Avengers in memorable and hilarious ways. Although Spider-Man’s character does not go through a great change in this film, his role is a source of fun and playfulness that helps make the battle between the Avengers far more amusing than expected. Paul Rudd’s solid turn as Ant-Man also contributes to the wildly funny antics in this portion of the film.

The notable performances in this film include Chris Evans’ portrayal of Captain America, Robert Downey Jr.’s portrayal of Iron Man, Chadwick Boseman’s portrayal of Black Panther, and Daniel Brühl’s portrayal of Zemo. Evans has portrayed Captain America several times, but this time he makes it seem as if the weight of the world is upon his shoulders. Captain America is desperate to protect The Winter Soldier and thwart the machinations of Zemo, but he does not want to hurt the other Avengers and start a war. Due to the strong chemistry between Chris Evans, Robert Downey Jr., and Sebastian Stan, as well as their character development in previous films, their conflict is rich and worth investing in emotionally.

Robert Downey Jr. has portrayed Iron Man/Tony Stark since 2008’s Iron Man, but he convincingly conveys the fact that his character is more world weary, vulnerable, and eager to protect the Avengers than ever before. Because screenwriters Markus and McFeely provide him with a motivation for supporting the Sokovia Accords, a piece of legislation that ultimately divides the Avengers, and for wanting to stop the Winter Soldier, audiences can sympathize with his plight. Also, Downey’s one-liners are as impeccably timed and hilarious as his work in Marvel’s The Avengers.

Chadwick Boseman’s (42, Gods of Egypt) excellent performance as T’Challa and Black Panther is evident in that he is only introduced into the film minutes before someone he loves is murdered, yet his emotional reaction is raw and makes his quest for vengeance understandable. Boseman’s emotive work conveys his character’s rage and quest for vengeance seamlessly. One of the best aspects of his character is that Black Panther has many similarities with Zemo, yet he is a hero. Because this is a superhero film, both characters lost people that they love and are highly motivated to earn their vengeance.

Daniel Brühl’s performance as Zemo is commendable. Even with his accent and grand plan for vengeance, Brühl never loses sight of the humanity and wrath that drive his character. He even manages to make his delivery of lines menacing enough to make him a convincing mastermind. With this character, the screenwriters deserve credit for providing him with a motivation that makes his goal – to tear the Avengers apart from the inside – understandable and worth rooting against. 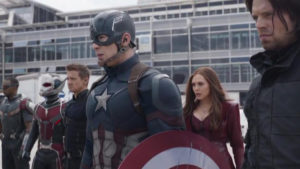 The action sequences in this Captain America: Civil War would not be nearly as epic and suspenseful, if it were not for the fact that each set piece, backdrop, costume, and explosion is realistically rendered through a combination of practical and CGI-effects. That being said, Joe and Anthony Russo’s direction of the action sequences make it clear that they are the best at staging up-close and personal fight sequences. The Russo’s know when to go for grand spectacle, a la the airport fight, which is one of the best action sequences in any comic-book adaptation ever due to its excellent mix of spectacle, comedy, and strong dramatic moments. They also know when to go smaller, a la the final fight between Iron Man, Captain America, and the Winter Soldier. This climactic battle is the greatest showdown between superheroes in any film ever due to the emotionally raw performances of Chris Evans and Robert Downey Jr., Joe and Anthony Russo’s excellent staging, and the limited set piece. It is more intense because Iron Man, Captain America, and the Winter Soldier cannot run away from one another. Also, the manner in which this conflict is resolved is well-developed and cathartic. 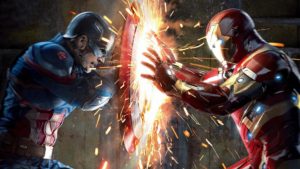 Captain America: Civil War is Marvel Studio’s darkest and most mature film yet. Even though it is not perfect, it boasts strong performances, excellent comedic relief, bold ideas, incredible visual effects, and thrilling action sequences.

Rated PG-13 for extended sequences of violence and mayhem.

Where does this film rank (for you) among the other installments of the Marvel Cinematic Universe?

Captain America: Civil War is Marvel Studio's darkest and most mature film yet. Even though it is not perfect, it boasts strong performances, excellent comedic relief, bold ideas, incredible visual effects, and thrilling action sequences.
4/5