Although American Ultra benefits from solid casting and hilariously inventive action sequences, it is inhibited by poor pacing and tonal issues.

Thankfully, Kristen Stewart is vastly more emotive as  Phoebe, the protagonist’s girlfriend, than she was as Bella in the Twilight Franchise and Snow White in Snow White and the Huntsman. That being said, what carries this film is Eisenberg’s performance as Mike, a stoner screw-up that plans to propose to his girlfriend, only to have his plans derailed by an onslaught of trained assassins. As in most of Eisenberg’s performances, he is convincing as a loser that wants to be more than he is, yet in this instance, he is convincing as a man that is forced into becoming a dangerous weapon against his own will. Many of the film’s most hilarious moments are the result of Eisenberg’s mannerisms and line delivery. Kristen Stewart and Jessie Eisenberg’s chemistry is solid, which helps keep this film from completely derailing when it focuses on their relationship issues. The most notable supporting performance is delivered by John Leguizamo, who is known for voicing Sid the Sloth in the Ice Age Franchise. He portrays a perverted and insecure drug dealer named Rose. Both his comedic timing and dialect help him steal every scene in which he appears. Regrettably, Rose is not in this film enough during the final act and conclusion.

Screenwriter Max Landis, the co-writer of Chronicle, and director Nima Nourizadeh, director of Project X, appeal to humor in their ultraviolent and graphic bloody fights. For example, in each of the wildly inventive fight sequences, Mike uses everyday items, such as Cup Noodles and a spoon and dust pan to harm and or kill assassins. All of these hilarious moments are well-executed enough to work even though the audience knows that they are coming. Unfortunately, Landis and Nourizadeh take the over-the-top violence too far when police officers and civilians are slaughtered on-screen. Even though the consequences of these murders are skimmed over, ultimately, there is not enough dramatic heft or purpose to justify this senseless brutality. 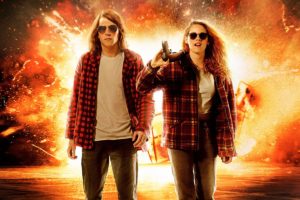 Max Landis’ screenplay has several surprisingly effective ideas in it. At one point, Mike and Phoebe discuss the cosmic significance of a car and tree, which starts out as hilarious, but winds up insightful. Another operative, known as Laugher, portrayed by Walter Goggins, discusses what its like to be turned into a weapon against his will with Mike. This scene resembles the heart-to-heart between Jason Bourne and The Professor in The Bourne Identity. While the dramatic implications of being turned into a killing machine are not as developed as they could be, this moment works in its own right.

What prevents American Ultra from excelling is its inconsistent pacing, which is swift during action sequences but as slow as molasses during several dramatic sequences. One particular argument between Mike and Phoebe lasts two minutes longer than it should. In the first fifteen minutes, until Mike meets Rose, the pacing and tone are both particularly uneven. Most of the laughs do not start coming until after the choppy opening act. It is worth noting that this film seemed to end three or four times before the credits actually rolled, which prompted several audience members to leave early. 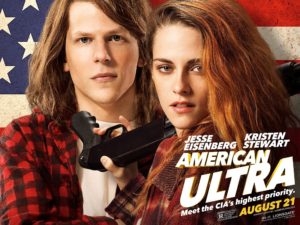 American Ultra features solid performances from Eisenberg, Stewart, and Leguizamo, plenty of laughs, and inventive fight sequences, but there are too many pacing and tonal issues to recommend seeing this in theaters. However, if you enjoyed the trailers, it is worth a rental.

Review: Lego Justice League:Attack of the Legion of Doom

REVIEW — “The Quiet Ones”