John Wick: Chapter 2 is directed by Chad Stahelski and written by Derek Kolstad. It has a cast featuring Keanu Reeves, Riccardo Scamarcio, Ian McShane, Ruby Rose, Common, John Leguizamo, Lance Reddick, and Laurence Fishburne. It tells the story of John Wick being forced back out of retirement by a former associate plotting to seize control of a shadowy international assassins’ guild. Bound by a blood oath to help him, John travels to Rome where he squares off against some of the world’s deadliest killers. It is the follow-up to John Wick (shocker) which was one the biggest surprises of 2014 and this was one of my most anticipated of 2017. With the hope it would be as bad ass than the original, I had high hopes for John Wick: Chapter 2. So does it deliver? Yes, it definitely does. John Wick: Chapter 2 is a fun, bad-ass, that features beautifully shot action and promises a great franchise. I haven’t had this much fun in a theater since the first John Wick.

Chad Stahelski has returned, this time directing solo (His partner, David Leitch, needed to take some time off for Deadpool 2) and he kills it once again. Stahelski is a veteran stuntman and it shows. The action is sleek and jaw dropping. If you are a fan of stunt work or action in general, this is a must see.  It’s so refreshing to see in this age of sloppy and overedited action flicks like Taken 3 and Alex Cross to see something that is well made and competently shot action. Chad Stahelski is a master behind the lens when it comes to action and every action set piece oozes with passion and raw energy. He has simply made a fun movie with a surprisingly intriguing plot. Everything works in John Wick: Chapter 2. Derek Kolstad penned the script and this is where John Wick: Chapter 2 becomes surprisingly impressive. Now, this is not to say the dialogue is super stellar but the story surrounding the gorgeous action set pieces is very intriguing. One of the best aspects of the first John Wick was the whole story line surrounding the hotel and the sort of mob organization operating in it and they definitely expand on it here. They really do a lot of world building here and it is very apparent the studio would like to make a franchise out of this story and for once the audience will agree. Much like last year’s Deadpool, I want to see a sequel. I want to see what exciting action sequences they can pull off and I want to see more. I could watch five John Wicks.

Keanu Reeves stars as the title character and once again, he kills it. This is his best role since Neo and definitely his best sequel. At times he may struggle through dialogue but his enthusiasm and commitment to the action sequences are frankly inspiring. In terms of being an action star, he has earned a spot up there with Tom Cruise. The rest of the cast is serviceable but this is really Keanu’s show. Ian McShane does a good job as the boss of the hitman organization and whenever he was on screen I was very interested. Common is also a welcome addition to the John Wick universe and I would like them to explore his character more in the following sequels. Ruby Rose does a fine job, I just didn’t really love her character or the sub-plot she had. Laurence Fishburn is in this for a few minutes and while he was good, he really didn’t need to be there. His character serves as a cute reference to The Matrix and set up for the sequel. While that is not necessarily a bad thing, he kind of felt shoehorned in. On a technical aspect John Wick: Chapter 2 is beautiful. The color pallet features vibrant blues, purples, and reds (duh). Every action set piece is a marvel to look at and every shot is dripping with deep colors and pulsating with music that even the most liberal theatergoer would have to admit what they’re watching is downright was awesome. The action is shot almost perfectly and the stunt work is awe-inspiring. The sound design, while at times overbearing, is very well done and immersive. The stylish filmmaking coupled with the incredible stunt work add up to make John Wick: Chapter 2 one of the best action films in recent memory and pull us out of the dreaded January releases.

So in short, John Wick: Chapter 2 is a sleek, stylish action film with a great lead performance from Keanu Reeves and the promise of a glorious franchise ahead of it. To say this is anything short than awesome is an understatement. Now, this releases alongside The Lego Batman Movie and 50 Shades Darker so you have a 66% chance of seeing a good movie this weekend.  4/5

REVIEW — "A Cure For Wellness" 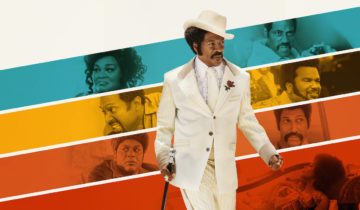