Home›Movies›REVIEW — “A Cure For Wellness”
Movies

Don’t see this if you’re scared of the dentist

A Cure For Wellness is directed by Gore Verbinski, written by Justin Haythe, and has a cast featuring Dane DeHaan, Jason Isaacs, Mia Goth, Ivo Nandi, Adrian Schiller and Celia Imrie. It tells the story of an ambitious young executive who is sent to retrieve his company’s CEO from an idyllic but mysterious “wellness center” at a remote location in the Swiss Alps. He soon suspects that the spa’s miraculous treatments are not what they seem. When he begins to unravel its terrifying secrets, his sanity is tested, as he finds himself diagnosed with the same curious illness that keeps all the guests there longing for the cure. Now A Cure For Wellness has been shrouded in secrecy ever since the first trailer debuted and I was very interested to even see what it was. It looked like the love child of Inception and Eyes Wide Shut and with a director like Gore Verbinski, this was a must see. A Cure For Wellness starts off as a beautifully shot, surreal, intriguing atmospheric thriller that by the third act, unfortunately, turns into a predictable, muddled, mess.

Gore Verbinski is directing here and he has proven time and time again to be a director to watch. With hard hitters like The Ring,  Pirates of the Caribbean: The Curse of the Black Pearl, and Rango I will watch anything with his name attached, and while his last outing as a director was The Lone Ranger I was none the less excited for this. Now when A Cure For Wellness is good, it’s good. Verbinski knows how to shoot, with the cinematography being beautiful to look at throughout and the sets are consistently gorgeous. Where Gore falters is holding the story together. The film starts off so strong but as the story progresses, Verbinski seems to loose grasp of the story and it falls into predictable and frankly campy territory. It was actually jarring to see the plot derail so much that my audience went from being silent to openly laughing at the screen.

Justin Haythe penned the script and the biggest praise I can give him is that A Cure For Wellness is damn original. This is an original concept and while it may not work all the time, he certainly does not hold back. The world built by Haythe’s script is an intriguing one and the first two acts are very well done and mysterious. The third act is really where most of the problems derive from. The most annoying this about A Cure For Wellness is how predictable it actually is. The story is very heavy handed and when they try to reveal plot twists but the audience has already figured them out a while ago. This type of thing happens so many times you just want the film to wrap up. Some of the dialogue also isn’t the best and while some characters are given a lot to work with others are given little to nothing.

Dane DeHane stars as the main character and he does fine. This is a large step up from his work on The Amazing Spider-Man 2 and while he does struggle to pull off some of the dialogue he is given, he does a fine job as the leading man and I’m still super excited for Valerian and the City of a Thousand Planets. Jason Isaacs does a great job and while I won’t spoil his character but he makes it believable and it works in the world the story takes place in. I can’t talk about Mia Goth’s character without spoiling it but when I mentioned earlier some characters weren’t given a lot to work with she was who I was talking about. She does a fine job, but she is really only given one trait to work with. She plays a damaged girl and that’s all she really can do. The problems with acting can all be traced back to the less than stellar dialogue they’re given.

Now technically, A Cure For Wellness shines. I know that is thrown around a lot but it really is great here. The cinematography is sleek and interesting to look at and the color pallet is a mix of dark greens and whites. The score is surprisingly good and overall, it’s obvious these are the areas Gore Verbinski shines in. Now there are a few continuity flaws and while that may seem forgivable, the one I noticed was laughably bad and pulled me entirely out of the story. To avoid spoilers, in one scene where a character has his, uh, his “private part” out and in the next shot, it’s just gone with nothing indicating he put it away. I guess this is more of a bad edit but it was jarring and really pulled me out of the movie.

A Cure For Wellness ultimately really disappointed me. There is a lot of really great imagery and some truly disturbing scenes and I winced and actually had to look away at a point. But all of that great stuff is overshadowed by the mediocre and campy content the story get’s into. It could have been something great and it, unfortunately, isn’t. 2/5 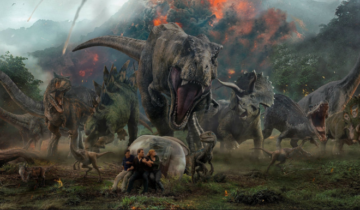