“Dracula Untold” is the untold story about Vlad the Impaler that has already been told, but is now being retold as if it was untold. Did you get that? This is like a full-length version of the first 15 minutes of Bram Stroker’s “Dracula,” but does it work? I liked the cast, and the feel/tone of the story, but that’s about where the good stuff ends.

Let’s start with Luke Evans who plays Vlad the Impaler. I really like this actor, and I don’t think he gets enough roles in mainstream Hollywood flicks. He’s handsome, fit, and he’s actually a great actor, but he is relegated to parts in genre films (with exception to a few Blockbusters like “The Hobbit: The Desolation of Smaug” and “Fast and Furious 6”), but he makes a believable action bad-ass. I would love to see him take over for Antonio Banderas as Zorro. Add to this Charles Dance, Tywin Lannister from “Game of Thrones,” is really creepy and convincing, but has little screen time. The rest of the cast is interchangeable, and unimportant, with Dominic Cooper playing the poorly developed bad guy.

The action scenes, while Fast and Furious (see what I did there?), are a little to Michael Bay for me. The lack of blood, from a movie about Vlad the Impaler, and the shakey camera effect that obscures proper view of the action really lessens the impact each scene has. This movie isn’t a horror flick, though one would think it would be since it’s about Dracula, and its action scenes are so weak because of the aforementioned issues that the whole thing almost seems dull. I’ll give them credit for really going all out on the Gothic feel of the movie. They did a great job grounding into that time period, and the set pieces, though low budget, still managed to give off that creepy vibe.

The story itself is drawn out, but the concept was interesting. I really like the idea of seeing a film about the motives of Dracula, and why/how he became the way he did, but the antagonist was so weak and so generic that it really weakens this origin story. It ends up being another ‘do what we must for revenge’ tale we’ve seen so many times before. I really did like the very last scene, and how Charles Dance might be playing the Nick Fury of the Universal Monster’s Cinematic Universe. Should this film succeed it will be the first monster film of many that Universal will make that all share the same universe.

This movie, believe it or not, had a lot of potential, but it was squandered by the writers. Instead of making an insightful origin tale about Dracula they made a mindless action film about some dude with powers. There’s nothing deep, dark or scary about this flick, and it just comes off as generic. I loved Luke Evans and Charles Dance, but the rest of the cast were useless, and the antagonist was so poorly written he could have really been anyone. I would have graded a LITTLE bit higher had it been Rated R, but they managed to screw that up too. 2.5/5

"The Judge" Review: Ref Souto gave it a perfect score

"Kill the Messenger" Review: Does Ref Souto think it's worth your time? 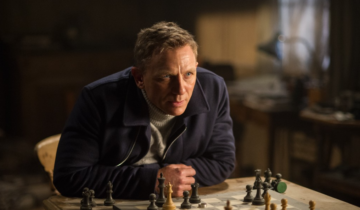