“The Judge” Review: Ref Souto gave it a perfect score

“The Judge” is one of the most well written, directed, and cast films you’ll see all year. It’s up there with “The Skeleton Twins” for me, and that’s saying something. Robert Downey Jr. proves again that he is more than just a guy in a suit of armor (and not just a billionaire philanthropist). With compelling characters, excellent dynamics and interactions, and a great mending of family and court dramas “The Judge” is an instant Oscar contender and Must See film.

Let’s start with the cast that is lead by the always incredible Robert Downey Jr. Despite being most famous right now for “Iron Man” he has always been an interesting character to see on the big screen, and he brings a lot to every role. Whether it be “Kiss Kiss Bang Bang” or “Sherlock Holmes” he always leaves you impressed with his performance. Robert Duvall, at the age of 83, is still able to act circles around almost anyone, and it makes me glad Jack Nicholson backed out of this project. Duvall and RDJ had incredible chemistry together, and it left some teary eyed during a particular court scene. Joining these tremendous leads are Vincent D’Onofrio, Vera Farmiga, Billy Bob Thornton, Jeremy Strong, Dax Shepard and more who all actually contributed to the overall success of these films. All their characters had an important role to play, and all the actors handled them gracefully. I wish I had more time to talk about each and every one.

The story was so well written it doesn’t even feel like you’re watching two movies in one. The long run time certainly makes that known, but the way the court element and the family dynamics are so seamlessly mixed together will make you wonder why more films can’t successfully mix two movies. The characters are all developed in a way that contributes to the lead character’s growth, and also help you understand why there is so much bad blood in this family. I really enjoyed how the writers were able to blend all this back story and development into the actual story without having to come right out and tell you directly. There are many things you are able to infer and understand from home movies and stories that are told that help paint this broader picture of their family, and that’s incredible.

Family/Court dramas aren’t everyone’s thing, but for me this really knocked it out of the park. RDJ was the perfect person to bring a little comedy into this type of a film to help break up the tension, and it works so well. The incredible writing, the rich characters, and the excellent cast really turned “The Judge” into more than just a drama. This is a Must-See. 5/5 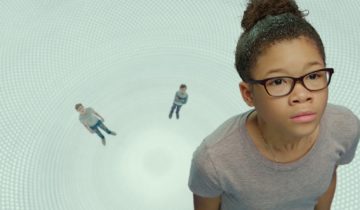 REVIEW — “A Wrinkle in Time”