Home›Movies›“Kill the Messenger” Review: Does Ref Souto think it’s worth your time?
Movies

“Kill the Messenger” Review: Does Ref Souto think it’s worth your time?

According to Wikipedia, “Kill the Messenger” is an American drama thriller directed by Michael Cuesta and written by Peter Landesman. It’s based on the book of the same name by Nick Schou and the book “Dark Alliance” by Gary Webb. The film stars Jeremy Renner (in his first film as a producer), Michael Sheen, Andy Garcia, Ray Liotta, Barry Pepper, Mary Elizabeth Winstead, Robert Patrick, Rosemarie DeWitt, Paz Vega, Oliver Platt, Richard Schiff, and Michael K. Williams. I know that sounds like the makings of an incredible film, but we got was an interesting, but mediocre, ensemble piece.

Jeremy Renner stars as Gary Webb, and everyone else is just background noise. Despite being all over the place promoting the film Ray Liotta is in this for all of five minutes, and most of the other supporting cast members have bit parts as well. While everyone does an excellent job with what they have it was almost criminal to include so many great actors in such insignificant roles. Though every time someone was appeared it brought a much needed breath of fresh air to this relatively dull ‘thriller.’ If they wanted it to be a thriller they should have started about 40 minutes after they did, and expanded on the suspense/thriller part that occurred for maybe 15 minutes.

The story itself is super fascinating for someone like me. I knew very little about the Iran-Contra scandal going into this, as I wasn’t alive during most of that, but enough that certain name drops in conversation meant something. It’s truly interesting to see how our government deals with scandals (most of the source material was verified as true before the movie was made). It’s almost terrifying to think about how this could happen to one man just trying to tell the truth. They make amazing parallels to the difference in media then and now, and almost mock how media today is manipulated by politics.

The biggest problem is this is very much two films in one, but thematically it doesn’t work. The first half could have been its own amazing movie with further plot and character development, and the last half could have been the same. Instead they tried to squeeze two different movies into one, and left out a LOT of development which made it feel flat. With an incredible cast, and incredible source material, this should have been an A+ film, but instead if borders on mediocrity. 3.5/5 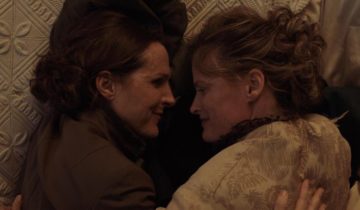