Last month the Refs had a chance to talk to both the Co-Directors of “A LEGO Brickumentary” and world renown Brick-Artist Nathan Sawaya.  If you don’t recognize the name, you will surely recognize his art. (LEGO Oscars anyone?)

Junge & Davidson are no strangers to documentaries, both have been nominated for academy awards. (And one of them possesses an Oscar with well worn buttocks..)   With a Lego Brickumentary they take a decidedly upbeat turn and have crafted a film that is both informative and fun!  Watch the video to learn more about the infamous Oscar, LEGO’s role in the film, and the challenges they had while working on a subject matter that ended up being surprisingly diverse.

If his name isn’t immediately recognizable to you, surely his art is.  One of his more famous pieces is shown above,but it is a single entry in hundreds of impressive works that he has created.  During out interview he dropped a hint of a new Lego Art Exhibit that he is creating.  The following day we learned that this new celebration of “heroes and villains” is a collaboration with DC called “The Art of the Brick:DC Comics!”   The photo below will give you an idea of the awesomeness in store.

“A LEGO Brickumentary” opens across the nation on July 31st, and is available on Itunes and VOD the same day!
Check out our review HERE. 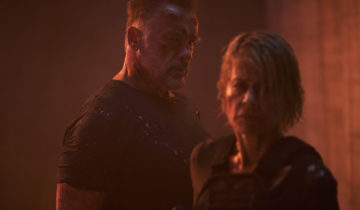