Home›Movies›REVIEW — “All In: The Fight for Democracy”
Movies

From its argumentative core to its very title, “All In: The Fight for Democracy” is deceitful. As important as Lisa Cortes and Liz Garbus’ documentation of the history and recurrence-to the present day-of voter suppression is to the establishment of America’s democracy, “All In: The Fight for Democracy” misleadingly frames the problem’s eradication as the solution to the United States’ unrepresentative government. Thoroughly depicting voter suppression from its origins in the reconstruction era to its pervasion in contemporary elections, the documentary succeeds in validating the problem’s importance. Yet, it failingly shies away from exploring the corruptive roots of an establishment that consistently provides voting options unrepresentative of the people’s desires.

There is nothing—in form or content—that separates “All In: The Fight for Democracy” from the mainstream line of documentary production. Garbus and Cortes opted for a traditional expository form exempt of any idiosyncrasy, interchanging interview footage with historical artefacts, television records, and other visual montage respective to the subject of discourse—B-roll. Politician Stacey Abrams, Carol Anderson, Jayla Allen and other guests drive the narrative from personal anecdotes to factual explanations that comprise historical overview of voter suppression in the United States. The B-roll follows along, intensifying the emotional and pedagogical value of the interviews through footage of voter suppression occurring in the Jim Crow era.

In its mundane format, the documentary’s historical summarization of voter suppression is proficient, beginning at the intolerant response to the 15th amendment—which provided African Americans the right to vote—inspired by the 1890 Mississippi convention. The statal government instilled a voting tax designed as a classist obstacle to the African American community, which had no economic means following the lack of integration in the reconstruction era. Consequently, the documentary overviews the gerrymandering strategies that followed, from the KKK’s lynching of those who voted to the contemporary means of suppression: purging—the purposeful closure of voting centers—and ID verification. The documentary emphasizes the classist systematic marginalization enforced by contemporary legislations and aspiring candidates that exploit the economic limitations of the lower class.

Stacey Abrams gradually becomes the protagonist, both as a(n )(alleged) credible source and a victim of voter suppression herself. The daughter of a voting rights organizer and an activist herself, Abrams shares various anecdotes of her lifelong struggle with voter suppression, one of which is her father’s imprisonment for encouraging his community to vote. Yet, her most dramatic clash with voter suppression came in the 2018 elections for Georgia’s governorship, wherein she claims to have lost as a cause of the 25,000 voters that were repressed by her rival Brian Kemp—the poll supervisor. Abrams denounces Kemp of following the purging tactics employed in Wisconsin during the 2016 elections, purposely closing voting centers to discourage voters without vehicles and lengthen waiting lines. Furthermore, Abrams, accuses Kemp of neglecting absentee ballots. 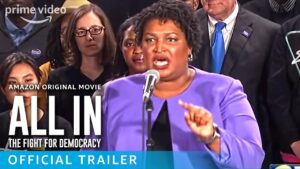 Her election day becomes the documentary’s proof to assert that voter suppression persists today, establishing Abrams as the perfect source: A lifelong voting rights activist turned politician that has endured suppression every step of the way, thus becoming the perfect face of the documentary. Notwithstanding, as ideal a figure as Abrams seems for the production, her pro-establishment political figure ultimately prevents the documentary from escalating its study of class warfare into the roots of the establishment that generates billionaire-backed candidates every four years. The classist marginalization employed through voter suppression shares a common factor with the rampant lobbyism occurring behind closed governmental doors: money.

Money has become a tool of unregulated power that supersedes governmental scrutiny. Consequently, candidates run every year in representation of the billionaires that endorse them. They spew populistic promises that are nothing but bait to receive votes that will eventually sustain the legislative influence of the lobbyists behind them. Thus, the government turns into a state not driven by the people, but by those with more influential capacity: the rich. Yet, Abrams—a political figure outspoken against unrepresentative governments and injustice—has accepted millionaire donations and has endorsed Joe Biden, a candidate funded by over 120 billionaires. She has partaken in a system that inhibits democracy. More is expected from a politician idolized in a documentary entitled “All In: The Fight for Democracy”

Ironically, it is the documentary’s bond to Abrams that prevents it from analyzing the socioeconomic hierarchy that exists behind voter suppression. In parallelism with Abrams’ establishment qualities, the documentary fails to deliver a systemic analysis beyond the superficial, equivocally framing voter suppression as the key to a revolutionary change in America’s unrepresentative system. “All In: The Fight for Democracy” is successful as an overview of the historical development and prevalence of voter suppression. But it is nowhere near the intrinsic key to a representative democracy its title claims it to be. Parallel to the establishment its figure Abrams represents, the documentary is rotten at its core, vouching for justice through the lens of a politician that has benefitted and—through her endorsement of Biden—corroborated the lobbyist system that impedes the American democracy from surging.