The werewolf genre is one that is pretty scarce as of late. Not that there has been an abundance of werewolf features in cinema history, but with the latest resurgence of horror films with Blumhouse and other companies on the rise, you’d think there would be more from the genre! Eight for Silver is the latest film from director Sean Ellis, and follows John McBride (Boyd Holbrook), a pathologist, who is hired by land baron Seamus Laurent (Alistair Petrie) to hunt down a wild creature who has been rampaging his family and village. This quickly spirals into an even more sinister and cursed task than McBride signed up for, as more murders and attacks begin to occur.

Right off the bat, the film establishes its tone and style with an absolutely brutal opening war sequence. One of the most admirable aspects of this film is not only the solid horror direction on display and the impressive use of gore, but it’s refreshing to see a horror film primarily take place during the daytime. So many horror films result to nighttime sequences simply because of the inherent scare factor that it invokes, or even for budgetary reasons it can make CGI look a little less obvious. But Eight for Silver doesn’t take the easy way out, and makes for some genuinely unsettling sequences take place during broad daylight. 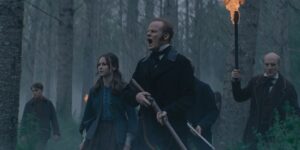 All of the performances are solid, but Boyd Holbrook really shines as the films main protagonist. He has enough of a shady history and rough-around-the-edges nature to him that you believe he’s really the man for the job when it comes to hunting down this creature, but there’s a softness and genuine charisma as well that makes the quieter moments work all the better. The perfect balance between the characters and the horror is what makes this somewhat of a refreshing film for the genre. I was genuinely surprised by how much sincerity can be found within the screenplay by the third act.

My only real issue with the film is that I found it to be a bit overlong. I think it would’ve played a little bit better if they weren’t afraid of having a leaner edit that would make for quicker pacing. Even with that being said, Eight for Silver is an immensely solid directorial effort and a welcome addition to a genre that has been seemingly forgotten by Hollywood. I have no idea what distributor will nab it from the festival, but I think it’ll make for a perfect release later this season – preferably in the fall.