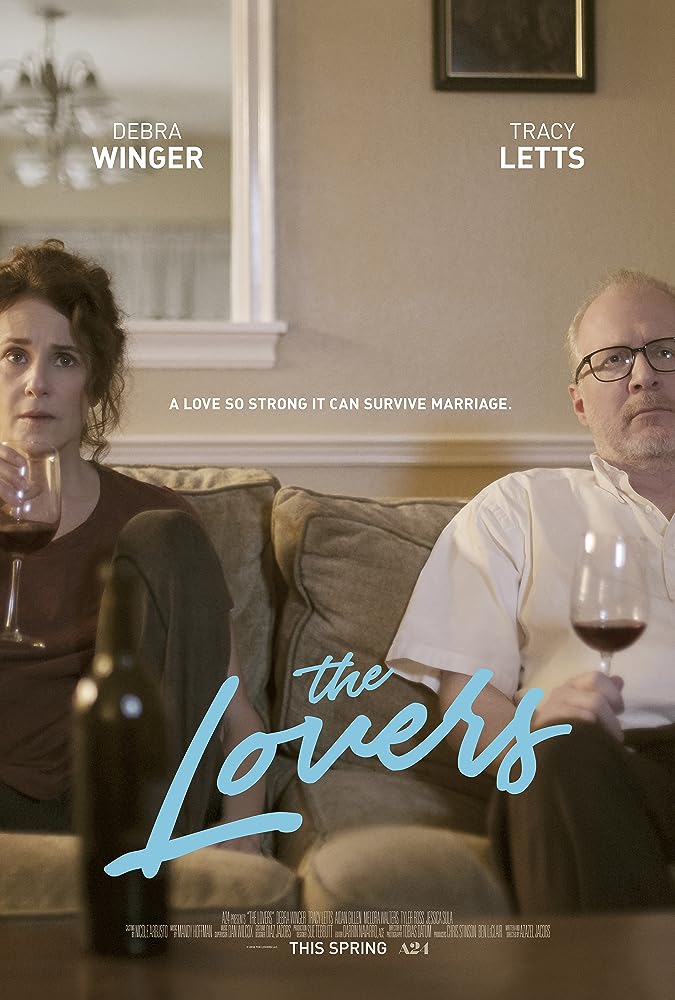 If you’re into the unconventional and quirky, you’re in for a treat. The Lovers is a unique romantic story from A24 about a long-married couple, Micheal (Tracy Letts) and Mary (Debra Winger), who have grown so far apart, they seek fulfilment in their individual affairs. Then seemingly out of nowhere, a random spark seems to ignite their dying marriage, complicating their already convoluted relationships. Directed and written by indie aficionado Azazel Jacobs, this movie is incredibly enjoyable.  It takes an interesting premise and stretches it out very well, making everything play out beautifully.

First off, it’s worth mentioning how damn charming this film is.  Azazel Jacobs’ direction and writing is sharp. He knows what he wants his audience to think tonally. The film takes on a whimsical vibe and rides it until it’s over, and it’s that idea that makes The Lovers so good. Since the movie is so aware of what it needs to be, it lets the movie flow naturally, making you feel like you’re really watching Micheal and Mary struggle through their awkward dilemma. The dialogue is very delightful and the main characters are very realized. However, there are some nit-picky issues I have with the script. Some of the bigger dramatic scenes can be a little unclear in their goals and some of the supporting characters fall a little flat. Nevertheless, the script and the direction really shine in this flick.

Oh man, the acting was refreshing. Tracy Letts and Debra Winger carry the film with their superb performances. Both of them portray the nuances of the characters very well, they do an amazing job showcasing the plight of Micheal and Mary.  They don’t try to overact, making everything feels very real. They peel back the screen and really make you really feel like they are struggling through what they want out of their relationships. Another nit-picky thing I have though is the supporting cast falls a little flat, with the exception of Tyler Ross who plays their son Joel. They don’t really bring much in terms of character, which is unfortunate due to the fact that it could have made up for the lackluster writing in terms of it’s supporting cast.

The score by Mandy Hoffman threw me off, it’s tremendously beautiful, which I did not expect for a romantic comedy. It has a sweeping philharmonic sound that services the film very well. I honestly believe I might listen to it in my spare time. The editing and cinematography almost work together. Jacobs’ seems to prefer subtle pans to a lot of quick cuts, letting the actors breathe a lot more. It really shows and it makes the movie look seamless. The movie also has a very light color pallet that seems to hang around a blueish greenish color, which adds to its quirky quality. The locations help the story as well, making the audience aware of suburbs, which adds a sense of realness that does add to the tone.

Overall, The Lovers is an excellent and original romantic comedy. It takes an interesting plot and makes it into something convivial and tangible. I wouldn’t necessarily say it’s for everyone, I’d recommend it to a more mature audience. Still, I do recommend The Lovers for anyone who is a sucker for a good indie rom-com. 4/5