Fans of the series will want to watch this immediately, but casual viewers are better off waiting until part 2 is released.

A perfect example of Hollywood greed taking precedence over cinematic quality, “Mockingjay Pt 1” is a dull, padded, primer to the trilogy’s finale,which isn’t released for another 12 months.  Disappointingly, “Mockingjay” quickly dilutes the exciting crescendo that was reached at the end of “Catching Fire” by reducing Katniss (Jennifer Lawrence) to a selfish, disorientated, mess.  It takes roughly 30 minutes of the film for her to finally take a stand and chose to become “The Mockingjay”, a symbol of the people’s rebellion.  A decision she tries reversing on a whim multiple times throughout the movie.  It’s hard to root for  a heroine when they are so quick to shy away from their responsibilities.  Further complicating the story is her obsession with Peeta (Josh Hutcherson), perhaps the most boring male character in the entire series.  Again, it’s hard to stand behind a heroine who has such poor taste.

For the third time in the series new screenwriters were used and this time it was a step in the wrong direction.  The film consists mainly of reaction shots of Katniss overreacting to atrocities that are no surprise to the audience, and a odd group of futuristic filmmakers creating propaganda shorts. While every performance is well done, the lines and scenarios they are given to work with are mediocre at best.  Most of the film is spent waiting for something important to happen. At one point in the movie, we are shown the exact same set, with the exact same reveal, with the only difference being the second time it was recorded by the propaganda team.  Directorial choices like this are made for no other reason except for extending the run time.

With all these complaints, it’s not a bad film, just an unnecessary one.  The last 20 minutes do pick up, but it’s too little, too late, and exists only to tease the audience into thinking the FINAL film will be worth seeing.  Ironically one of the best lines in the film reflects exactly how the audience feels upon leaving the theater, “The worst torture in the world is waiting, and knowing there is nothing you can do about it.” 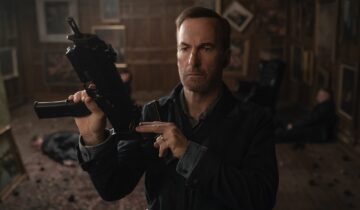