Oscar Issac is a blessing

Suburbicon is directed by George Clooney, written by George Clooney, Joel Coen, Ethan Coen and Grant Heslov, and stars Matt Damon, Julianne Moore, Noah Jupe, Glenn Fleshler, Gary Basaraba and Oscar Isaac. It tells the story of Suburbicon, a peaceful, idyllic, suburban community with affordable homes and manicured lawns — the perfect place to raise a family, and in the summer of 1959, the Lodge family is doing just that. But the tranquil surface masks a disturbing reality, as husband and father Gardner Lodge must navigate the town’s dark underbelly of betrayal, deceit, and violence. Now, Suburbicon had a good amount of hype behind it. With a cast this great, a script by the Coen Brothers, George Clooney in the directors’ chair, and a great trailer, this had everything it needed to be a hit. Having seen it, it almost is. Suburbicon is a very mixed bag. While it does feature great performances, a fantastic atmosphere, and an intriguing plot, it, unfortunately, fails to balance that with its’ social commentary and attempts at dark comedy. While I overall enjoyed it, I can’t help but feel there was something much better inside.

George Clooney is directing here and he doesn’t quite stick the landing. Suburbicon really has an identity crisis and I’m not sure what it was trying to say in the end. The coupling of this crime story and racial commentary at times work, but at times really don’t. He often has trouble jumping from tone to tone and scenes often feel like they’re in completely different movies. But, at times, he does great. While very inconsistent, Suburbicon never seizes to be entertaining. George Clooney has made something really fun with a lot to love. He eats up the 50s atmosphere and he is clearly very passionate. He throws everything at the wall and sees what sticks. While this isn’t necessarily a knock-out, it’s a show of potential. I’ll be interested to see what he does next.

The Coen Brothers penned the script and it’s expectedly great. While I wasn’t the biggest fan of their last outing, Hail, Ceaser! they’ve made so many great films, that I’ll never not see one of their projects. Not to insult Clooney, but I would have loved to see what they would have done with the script. They might have been able to handle the tonal shifts with more grace and had the humor land smoother. They have a lot of great jokes and a lot of great characters. The crime story is very predictable but very entertaining. While it’s not wholly original, it’s executed with so much style and passion, it works. But when I say predictable, I mean predictable. Suburbicon never kept me guessing, and for screenwriters who live for diverting expectations, I was shocked, to say the least.

Suburbicon has an admittedly fantastic cast. Matt Damon is a great leading man and plays it very out of character here. Julianne Moore is expectedly great, and while she walks the line of absurd and good, for the most part, she pulls it off. Noah Jupe does a great job, especially for a child actor and Gary Basaraba plays a very likable and charismatic character. Now, onto why I loved this so much. Oscar Issac is featured, and while his time is fleeting, he is phenomenal in here. He has such a juicy role and he eats it up. He is easily the best part of this and I genuinely think he deserves awards buzz for his work here. I wanted the whole movie to be about him, or have a spin-off about his life. It’s my favorite performance of the year so far and it’d be hard to top it. He is excellent.

On a technical level, Suburbicon is very impressive. There is a lot of spirited camera work here, very seldom is the frame still or not symmetrical. The cinematography is all great, it has that grainy quality and pays homage to older films like this. The production design is fantastic, they perfectly replicate the era and every frame is dripping with atmosphere. I wish I had more to say, but everything is just really well done. There were a few continuity errors, but nothing too distracting. Like I said, Suburbicon had everything it needed to be great, it just didn’t stick the landing.

So, in short, while Suburbicon ultimately disappointed me, overall I was able to find a lot of enjoyment out of it. Maybe with a tighter script and a more capable director, this could have been something really special. 2.5/5 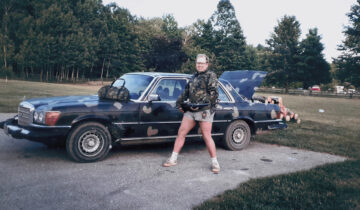