It’s been said that Marvel makes better movies.  Well, that is a misnomer.  Marvel does generally make better live-action films than DC/WB make.  But, DC most certainly wins in the animated realm.  Marvel’s animated ventures have been hit or miss, with their animated feature films being really sub-par.  Whereas DC has had a fairly consistent run, starting back in the 90’s with Batman: The Animated Series and culminating in the DC Universe Animated Feature Films of the last 7 years.  And in their 20th(!) film, they give Batman a son.  There is one word i will be using a lot in this review, and that word is ‘accessible.’  It’s the best way for me describe the film.

Son of Batman is based on Grant Morrison’s inaugural Batman story, ‘Batman and Son.’  Basically, Batman learns he has a violent, unruly pre-teen son, secretly raised by the terrorist group the League of Assassins.

This is the among the most accessible DCU animated films.  The script is tight and completely coherent.  I really think that even the most lay member of the comic book community could watch this and have a great experience.  So many of these films kind of rely on comic book back story in order to get the full magnitude of what’s going on.  Not Son of Batman.  The exposition is clear and concise.

The animation is just beautiful.  The DCU animation shop has seemingly settled on the same animation style for their films.  That wasn’t always the case.  They used to pride themselves on having drastically different animation styles with each new movie, which really worked, in my opinion.  But, the last 3 films have all looked fairly similar, not taking any cues from the actual comic source illustrations by Andy Kubert.  The quasi-anime style that they have settled on works, though.  ESPECIALLY with this film.

The pacing of this film is pretty spectacular.  It moves along just at the right pace for this type of film.

The characters were so good in this film, with a few exceptions that I will discuss below in the next section.  Nightwing, Talia, and Slade were all just wonderful.  If you’re a fan of Arrow and are looking for more Slade/Deathstroke, this will definitely give you your fix.

I do have to say that this is the best action I’ve ever seen in a DCU movie.  It ROCKED!  There were many moments where I geeked out a bit.

What Almost Worked (SPOILERS BELOW!!!!)

The ever so slight problem I had with the film was Damian’s character and the lack of the hero’s journey in his arc.  He is the same arrogant kid throughout the film and then at the end he just all of the sudden changed.  It felt forced.  It was a similar problem that the original Thor film had: the god of thunder changed into a completely different person literally overnight.  With Damian, it felt even worse.

Also, Batman’s character felt a bit shallow compared to some other portrayals.  The sadness wasn’t there that was present in Flashpoint.

How Close is it to the Comics?

It was a while ago that I read the original Batman and Son story that the film is adapted from, but I do remember a few things differently.  For instance, Slade was not in the original story (although he is a welcome addition).  Talia was originally the antagonist of the story, but they changed her to be (mostly) good and made Deathstroke take on that role.  They also excluded the Robin/Tim Drake character and mushed him into Nightwing/Dick Grayson.

Grant Morrison is fairly well known for his stories being rather abstract and not accessible to the general public.  So, I’m glad that they changed that for this film.  Don’t get me wrong: I adore Grant Morrison’s Batman comics, but I don’t think it would have worked for an animated feature.

Lastly, the emotional climax isn’t as good in the film as it was in the comics.  This is almost always the case with these adaptations, yet it must be pointed out.

A tight and accessible script, beautiful animation, and amazing action make this a very worthy addition to the DC Animated Universe.  It had a few issues, but not enough to derail the film.  And the action really does make the movie amazing.

This is easily the most violent and bloody DCU film to date.  It reminded me of the old Spawn film.  If I were the MPAA, I would have given Son of Batman an R-rating.  There is no sex, although Talia wears a suit that shows A LOT of cleavage through the film.

Son of Batman will be released on Blu-ray/DVD on May 6th.  You can pre-order it here:

REVIEW — "Under the Skin" 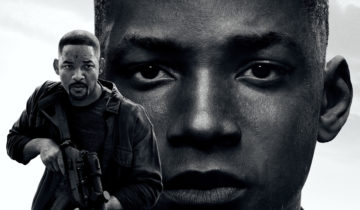