Nicolas Cage, for the longest time, has seemed like an actor who would never turn down a role. But underneath the persona of having seemingly a hundred movies per year, there’s a genuinely amazing performer who has proven time and time again that he shouldn’t be underestimated. PIG is perhaps the biggest example of that; a film being advertised and perceived as “John Wick with a pig” is actually.. really so much more than that. The film opens as quiet as possible, with Rob (Nicolas Cage) living peacefully with his beloved truffle pig. Throughout the days, they find meaning in working together and enjoying the evenings sharing food and a space together. But one day, a group invades his territory and steals his beloved pig, which sends him down an angry and vicious path to find out who did it and why.

Right off the bat, its important to note that this isn’t even remotely an action vehicle for Cage. I feel like its important to note this, because anyone going in with the John Wick comparisons in mind will be sorely disappointed leaving the theater. But in my humble opinion, it would not be due to the quality of the film but instead just general misunderstanding of what to expect. Because one of the most engaging and interesting elements of PIG is the way not only the narrative unravels, but the way it feels restrained in wanting to spoon feed you its themes. It creates a very eery and depressing atmosphere in the first act to give you a whirlwind of emotions by the end, and I found it quite effective! 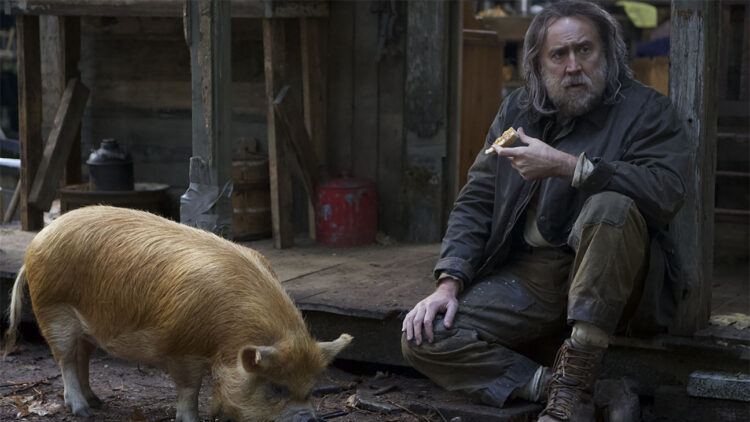 Nicolas Cage is undeniably the draw here, and he proves why from the moment this kicks off. There’s an unspoken beauty in the bond he forms with this pig that holds you throughout the rest of the film. I had to think about it for a while, but I think this is his finest performance since that of Kick-Ass in 2010. Both performances showcase the traditional Cage-isms that you would come to expect from the actor, but surprise you with a sometimes quiet and emotionally resonant performance as well. The supporting cast here is also fairly excellent, from performers who have very limited screentime but shine when they do appear like David Knell and Adam Arkin to the always reliable Alex Wolff, who shares surprisingly fantastic chemistry with Cage and is quietly the heart of the entire film by the time the credits roll.

As long as you’re going into PIG expecting something a bit more meditative and quiet than a schlocky, B-tier revenge flick then I think it’s well worth recommending. There was something genuinely surprising to me about the way this film is quietly about artistry, consumption, and the human condition and longing for the past and a better tomorrow all at the same time. It feels like something that can only be pulled off by a filmmaker who is super assured behind the camera, and from the first to final frame of PIG, its evident that Michael Sarnoski is a talent to look out for in the future.