“John Wick” is not only the bad-ass action flick we wanted, but it’s the one we deserved. After a summer full of genre pieces that disappointed true fans (*cough* “Transformers: Age of Extinction” *cough*) it was nice to see something simple come along to blow us away. Keanu Reeves has found the perfect role, and hopefully this is a franchise that continues to play out for him.

It’s important to note that this isn’t a story you should be taking too seriously, or panning over with a fine toothed comb, but one that is meant to be enjoyed for what it is. It almost seems as if even the characters know how ridiculous it is as some points, and that just makes it better. Once we get past the rocky start, where Keanu was forced to try to show range in his acting, the rest plays out like a fine tuned action machine, and doesn’t let go until the satisfying/heart-warming ending.

My only real complaint, aside from the rocky introduction, is some of the typical action clichés which really stand out in a gritty balls-to-the-wall action bit like this. There were a few too many times where dumb luck and stupid villains with Storm Trooper aim are the only reason our hero survives, but that being said it gets glossed over with the glorious violence. The director knew to keep the camera pulled back so we could see all the action clearly, and I appreciated that.

I really loved Keanu’s character in this as he was such a bad-ass that characters feared him before he even walked into the room. Something not many noticed was when he gets personal with his kills, like when he is stabbing someone, he stares at them right in the eyes as they die. THAT’S intimidating, and on another level from your typical action heroes!

The cast was great in this as well with Ian McShane, Willem Dafoe and Adrianne Palicki offering some unique and fun supporting characters, and gave us some great fight sequences. However I can’t say enough about how Keanu was perfect for his role. Not since “Street Kings” has he seemed so at home in something, and I think a lot of that has to do with him not having to show as much range. He is really believable as this action bad-ass with intense focus and nothing to lose, and I hope in the future we can get a look at where he came from as well as where he is going.

Overall “John Wick” is one of the best action movies you’ll see this year, and offered enough seat gripping action to keep the plot moving at a fast pace. His ruthless demeanor really sets him apart from other genre heroes/anti-heroes, and the comedy blending seamlessly into the almost self-aware plot helps lighten the tension at times. If you love action flicks then this is not to be missed! Bullets and Blood Await! 4/5

Side Note: I saw this in IMAX, and it isn’t worth the trumped up ticket price. The sound was great, but you can tell it was never meant for IMAX. Certain images are grainy/distorted due to being blown up on a bigger screen. 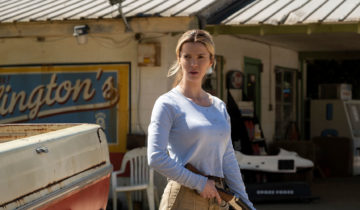