Home›Movies›REVIEW — “In the Heights”
Movies

REVIEW — “In the Heights”

What better way is there to announce that movies are back and that the Summer season has begun than a colorful, diverse, and genuinely enthralling big-budget musical? In the Heights follows the story of a block that is disappearing in Washington Heights. From the salons to the corner shops, people who have lived and worked in these streets for years are slowly moving out from the only home that they’ve ever known. Anthony Ramos plays Usnavi, a charismatic young man who runs the local corner store that all the locals start their day at. He dreams of one day migrating to the Dominican Republic to recover his father’s bar and hopefully settle down there. But for now, he’s stuck working every day of the week to make those dreams happen. Throughout the film, we not only get personal with his daily struggles but those of several other characters.

Despite the massive success of La La Land, Mamma Mia: Here We Go Again, and The Greatest Showman– it feels like we’re still not getting the rush of musicals that one would’ve predicted. But there’s something about In the Heights that feels like a genuine step forward. Not only because it is full of people of color headlining a blockbuster musical in the heat of the summer, but it feels like one of the first musicals in quite sometime that fully leans into the conventions of a classic Hollywood musical instead of trying to shy away from them or reinvent the genre in some way. In the Heights, from start to finish, gladly wears the badge of being a musical on its sleeves. From the lush and genuinely popping colors to the large scale ensembles that nail the choreography to perfection, this feels like the kind of motion picture I haven’t seen in quite sometime. 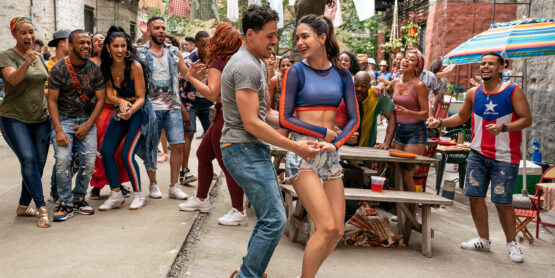 Even with all the flashiness and impeccable choreography, a story only works as far as we can care about the characters. And when it comes to such a large ensemble like In the Heights, it’s really impressive that not only are all the stories fully realized by the end, but each character feel like genuine individuals and no one ever feels forgotten or sidelined. Granted, this is a film that is well over two hours so it has plenty of time to do so – but it is genuinely nice and refreshing to see a film of this scale put its characters first and foremost and wear its heart on its sleeve with some genuinely fantastic performances to go around as well.

Will this open the flood gates for even more musicals? Only time will tell, but for me personally, In the Heights has reminded me why I love the genre so much and how many beautiful stories can be told when you put this much love and care into a project of this magnitude; it’s an absolutely wonderful film and an absolutely riveting time at the theater. Jon M. Chu has proven that he is one hell of a director, as he brings to life the magic of everyday New York life in a visually ravishing and musically enthralling way.