The Hitman’s Wife’s Bodyguard is the follow-up to the 2017 film The Hitman’s Bodyguard, that sees the return of Ryan Reynolds, Salma Hayek, and Samuel L. Jackson in their respective roles. The film picks up not too long after the first film ends, with Reynolds’ character Michael Bryce attempting to leave behind the bodyguarding business for good. He has recently attended therapy for all the traumas he’s endured, and has vowed to no longer kill anyone. Fresh off a plane and on vacation, he quickly gets wrapped back up with Kincaid family as Sonia (Salma Hayek) recruits him to help her retrieve her husband Darius (Samuel L. Jackson) before its too late. Right off the bat, the laughs and action are even more outrageous than they were in the original – making for a pretty damn’ entertaining film!

One of the best elements of this film is how little it takes itself seriously. If the original film was mostly a standard action comedy that was loosened up a bit by its performers having a great time in their roles – this one plays out almost entirely like a farce. In fact, I’d say it ultimately feels like the action is an afterthought to the comedy here. There’s so much attention to detail to the running jokes and tons of payoffs to things that are introduced very early in the film that are jabbed at throughout. This isn’t high art by any means as a lot of it is standard, vulgar humor – but it really is impressive how consistently the film made me laugh. 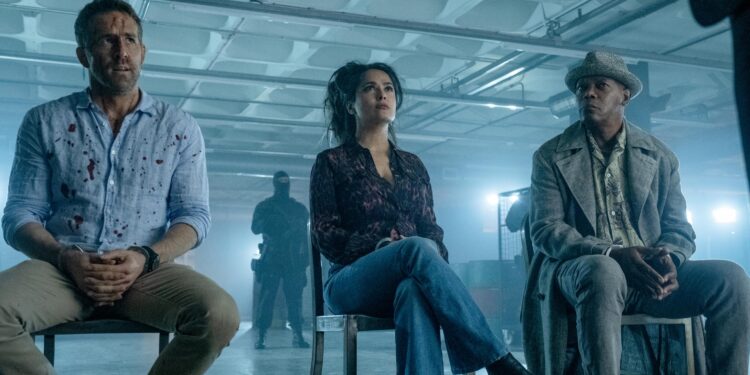 Another huge checkmark for me is how well the entire cast works off of one another from start to finish. Sure, Reynolds, Hayek, and Jackson are literally just playing their usual schticks that they’re known for here – but I don’t think that’s a bad thing whatsoever. These guys are great at what they do, and have genuinely compelling chemistry and comedic timing together. New to the mix this time are that of Frank Grillo who gets a lot of really solid laughs, Morgan Freeman in a pretty unforgettable role despite a limited runtime, and Antonio Banderas who is taking over the villain duties this time around. A lot of impressive performers on display here, and they all know not to take the material too seriously. This is a film where everyone in front of and behind the camera knew exactly what they were making and had a blast doing so.

Do you know exactly where this film is going from the moment it starts? Yes. Absolutely you do. But anyone going into this for the plot is sorely mistaken for what the intentions were. The plot is merely an excuse to give Jackson a reason to drop the f-bomb, Hayek a reason to scream, and Reynolds a reason to make a sarcastic comment. This is all done not only intentionally, but done with actual care and precision in its craft. In a Summer full of people going back out for the first time in a year, this is the kind of escapism that I can see doing wonders with general audiences. It’s a great time at the theater!

REVIEW — "In the Heights"