One of the biggest surprise hits of the last few years has been that of A Quiet Place back in 2018. What seemed like a modest yet accessible sci-fi blockbuster turned out to be a smash-hit with audiences around the world and the appetite for a sequel immediately began to form. After all, it’s been a while since such an original idea was this widely beloved and genuinely compelling with franchise potential. A little over three years and four release date changes later, A Quiet Place Part II is finally hitting theaters and… I think I liked it even more than the original? Not to say it is leaps and bounds better, but from the get-go, it’s evident that director John Krasinski is a director who will only get better with his craft behind the camera as the years go on.

After an enthralling and chilling opening sequence where we get insight on how these creatures attacked Earth on Day One, we immediately pick up where we left off from the first film. The Abbott family is still reeling from the vicious attack on their farm and have to pack up and leave their home. Along the way, they come across more dangerous creatures and Emmett (Cillian Murphy) – now that they’ve left their home and are out in the real world again, the lines between human and monsters are being blurred. It’s harder to tell which humans we can trust, and whether or not they are turning out to be worse than the monsters who invaded our world. 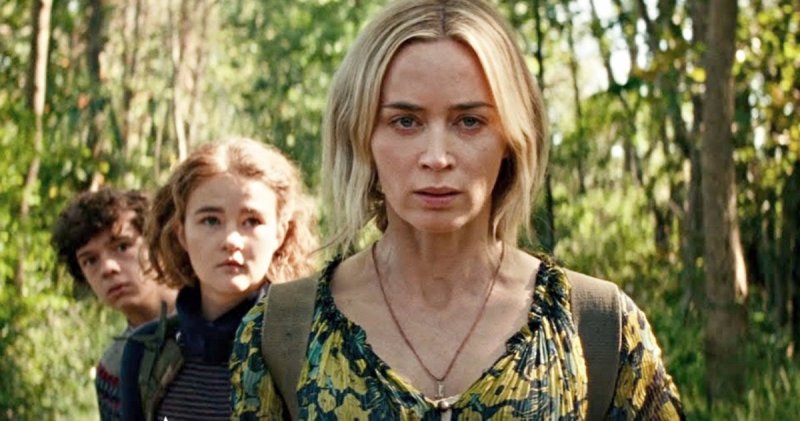 One of the most compelling things about both of these films is the presence of a genuine heart at the core of the story. It’s clear that Krasinski knows that any thriller or adventure movie you make can only go as far as you care about the characters that these things are happening to/around. It’s genuinely refreshing to see such a film understand the necessity of putting your characters first and your thrills/scares second. Even with that being said, there are many moments in this that I would consider to be even more thrilling than the original. There’s one particular scene involving a bear trap that actually made me let out a rather large gasp in the theater. This world is so perfectly realized and the stakes have never felt more real than now, when the Abbott family is on their own in the outside world.

Across the board, the performances here are all amazing. Emily Blunt is fantastic as she always is, Noah Jupe turns in a stellar performance as he always does despite such a young career, and Cillian Murphy is a genuinely super compelling lead here; blurring the lines of good/bad perfectly and making us question our ideas of what a hero can/should be. But the real star of this movie is Millicient Simmonds, who was easily a stand-out of the first film, but does a lot of the heavy lifting here and completely nails it when doing so. Throughout all the scares, the emotions, the thrills, and suspense.. she is truly the heart of the film. For a highly anticipated sequel, it gets just about everything right. Sure, there’s some nitpicks to be had, but for the most part, it’s a genuinely enthralling and equally satisfying follow-up that organically leaves the door open for even more films.

REVIEW — "In the Heights"