Featuring some of the best actresses in the game, Greta follows Frances McCullen (Chloë Grace Moretz), a sweet girl working hard to get by in the city that never sleeps. One day she is riding the subway after work and she finds a fancy purse perched alone on a tram seat, and out of the goodness of her heart, she returns the purse to its rightful owner. The owner, Greta Hideg (Isabella Huppert), is extremely grateful that Frances returns the purse. This strikes a friendship seemingly out of thin air, with Frances being very sympathetic to the lonely and bored Greta due to the heavy loss of Frances’ mother. However, as the relationship develops, Frances becomes aware of the fact that Greta might be hiding some dark truths. What follows is a struggle for the women to understand each other before they figure each other out, that ultimately escalates to extreme heights. 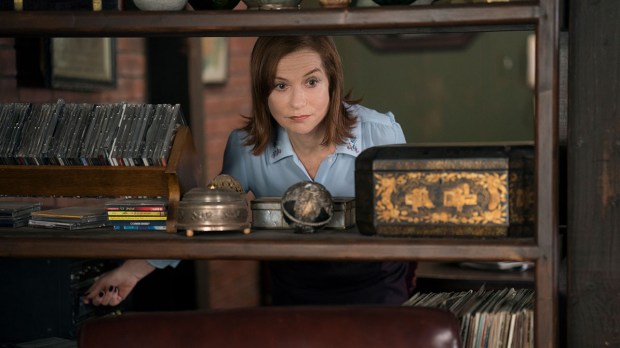 Let’s jump right into the criticism because, to be honest, I have very mixed feelings about this film. One thing that ended up being a huge disappointment (sorry to report) was the performances. I am a huge fan of Huppert’s work, and Moretz has been growing throughout the years I have been watching her. Yet this seemed like a step back from the quality I’ve come to expect from both actresses. The performances are a little rudimentary for actresses who have such awesome acting ranges. In scenes where some important plot points are revealed, the actresses stick to these unbelievable portrayals of emotion that truly did not seem sincere. In a film marketed as a horror/thriller, the intense emotions of the film felt rushed. Even from a filmmaking standpoint, the film doesn’t do much to create palpable thrills. The editing is simple, the colors in each frame are so flat, and the production design doesn’t really fit the tone the direction. The direction of this film almost feels like a Woody Allen horror film, and if you really try to picture that I’m sure you can agree that maybe that’s something we could all do without.

Despite the criticisms I have I did have a good time with the film. I admired the direction and I liked that the film didn’t try to be pretentious at all. It was telling a simple thriller story that didn’t need to get dressed up with some fancy metaphor. It was made just cause somebody had the idea to make it, and I hope the audience picks up on that authenticity. Although I am not too familiar with Neil Jordan’s work, it seems he has a very cut-and-dry approach to his writing and direction. How the story flows is honestly pretty interesting to watch, yet some of the individual scenes become a little lackluster due to some boring back and forth dialogue. Yet I wish we spent some more time getting to know the characters. Greta seems like such an interesting and malevolent character yet we don’t get to explore her story as much as I would have liked to. We simply don’t get a lot of time alone with Greta.

Greta is definitely for people who are craving a casual-viewing thriller. It is tense, yes, but it won’t twist your stomach or get your adrenaline pumping. The turns are interesting for sure but it would have benefited from more background on what those turns meant to the story. Despite what I think of the performances they’re still serviceable and honestly, there were a few moments towards the end where I thought the actresses reclaimed their powerful thespian statuses. Technically lackluster, but with a fun thriller of a story, Greta is a solid entry into the annals of early-year releases. 3/5