Kevin Costner kills a slew of people in this science-fiction/action genre cliché, but his fun screen presence isn’t enough to keep the story from sinking. With an all-star cast, and slow burn director Ariel Vromen (“The Iceman”) at the helm, you’d expect something a little less generic. However, writing team Douglas Cook and David Weisberg (“The Rock” “Double Jeopardy”) couldn’t inject the energy needed to keep the pace up in a film like this.

Jumping right into things the cast is clearly the best part. Ryan Ryenolds (“Deadpool”) somehow got roped into starring in essentially a better version of “Self/Less,” but with less screen time. I have to say his time on screen was the best use of an actor second only to headliner Kevin Costner. In the short time he was around he actually was believable in his role, and went outside his cocky/asshole comfort zone as an actor to give us something a little closer to “Safe House” or “The Nines.” Costner kills it in this as he seems to have been the only person that got the memo that he should have some fun. From start to finish he makes you actually believe his character’s development, though there’s very little written in the script. He has a few hilarious gestures/grunts in some scenes that really break up the mundane ‘action’ sequences. Arguably, you could say that Gary Oldman was on-point with his performance, but his character had very little to him outside of riding in helicopters and bordering being a bad guy. Tommy Lee Jones played the sour old man well, but offered a believable hint of concern/responsibility towards our lead character. The rest of the cast, including Gal Gadot (Wonder Woman from “Batman v Superman: Dawn of Justice”), were instantly forgettable.

The story in this is, as expected, its weakest point. I was hoping for more, considering the duo behind the pen scripted my favorite Michael Bay movie, but I was sorely disappointed. After the initial 10-15 minutes, which actually work really well despite some content issues (the CIA would never stop tracking their agent just because he’s using GPS…), the plot drops into generic cliché territory. We have the extreme good guy that doesn’t care about innocent life in favor of the bigger picture (Oldman), we have the bad guy that turns into a good guy and is willing to sacrifice for people he doesn’t know (Costner), we have the foreign extremist looking to use nuclear weapons to overthrow world governments (Jordi Molla), we have the innocent mother that develops a relationship with the ‘bad/good’ guy over the memory of a lost loved one, and the clichés just keep rolling in. On top of this, you have some generic set pieces, and poorly developed characters. You learn very little about Jericho (Costner) or Reynold’s character Billie Pope, and you don’t have any basis to go on as to which one knew/knows how to do what. Pope was never really shown to be a super spy, but somehow Jericho knows how to do all sorts of things once the ‘memory implant’ happens. I would complain about the impossibility of their memory stimulation thing even being possible, but in movies like this you’re supposed to suspend belief (That’s why it’s science-fiction….there’s science…but it’s fiction).

Predictability, I think, is “Criminal’s” greatest weakness. The story started off interesting and fun when suspending belief, but slipped into generic action tropes that kept it from continuing to be exciting. Kevin Costner is one of the few saving graces in this, but it will not be his “Taken.” He has tried many times (like with “Three Days to Kill”) to get his Liam Neeson moment, but his search will have to continue. Lackluster set pieces, sub-part writing and character development, and predictability make this an R-rated rental/Netflix-and-Chill fest at best. 2.5/5

REVIEW — "Barbershop: The Next Cut" 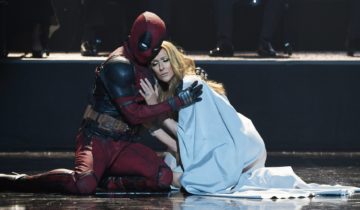