BlackKklansman is directed by Spike Lee, written by Spike Lee, David Rabinowitz, Charlie Wachtel, and Kevin Willmott, and stars John David Washington, Adam Driver, Laura Harrier and Topher Grace. It tells the true story of Ron Stallworth, an African-American police officer from Colorado, who successfully managed to infiltrate the local Ku Klux Klan and became the head of the local chapter. Now, Spike Lee is one of my personal favorite directors, and while his most recent films haven’t exactly been hits (I’m talking about you, Oldboy) I can’t ignore his classics like Do The Right Thing, so I was cautiously optimistic for BlackKklansman. So, having seen it, what did I think? BlackKklansman is just as firey, bold, and striking as you would expect from Spike, featuring great acting, strong visuals, and an impactful message that does not stutter. This is one to see folks.

Spike Lee is directing here and you can tell from a mile away. He is here in full form with his sharp, pulpy, and at times wacky style and I loved every second of it. BlackKklansman is one of the most energetic films I’ve seen this year and you can tell Lee was so jazzed to be making this. There is so much passion and emotion pumped into this that it would be near impossible to be bored during it. It’s somewhat of a joke at this point that Spike Lee is always angry, but I was surprised to see him handle this with such care and restraint. While this story could easily be used to paint people with a certain brush, Lee takes a step back and rather than blame one side or another, he provokes conversation and leaves it up to the audience to decide how they feel. Now, that’s not to say it lets the KKK off the hook, the film obviously takes a harsh stance against them, it allows the audience to decide where they draw their line. Lee did a great job here, and I look forward to seeing what he does next in this part of his career. This is tried and true, a Spike Lee Joint.

Spike Lee, David Rabinowitz, Charlie Wachtel, and Kevin Willmott penned the script and without repeating what I’ve already said, they do a great job. Now, they obviously had some fantastic source material to work with and it shows. BlackKklansman is an outrageous story that had my mouth dropping at each turn. They basically tell a true blacksploitation story, and it’s a blast for the audience to watch. BlackKklansman’s is able to tell a surprising and shocking story, while also drawing some disturbing parallels to current times, and makes strong comments on the state of America today. Regardless of your politics, BlackKklansman is well worth seeing.

BlackKklansman has a stellar cast, all of which deliver strong and convincing performances and the main stand outs are of course Washington, Driver, and Grace. John David Washington does a great job as the titular role, delivering one of the most restrained and believable performances of the year. Washington character is very conflicted and he does a great job conveying the internal struggle Ron Stallworth goes through. Adam Driver gives what might be my favorite performance of the film, and manages to be likable and insidious all at the same time. His character must infiltrate the KKK, forcing him to act in a horribly racist manner and through these sequences, he reflects on his own heritage. This arch is fascinating to watch and in one scene had me tearing up. Topher Grace gets the lofty task of playing David Duke, and while he is a horrible man, Grace does a great job portraying him. He showcases a range and depth I have never seen from him before, and while I can’t imagine it was an easy part to get into, you really feel and see the hatred in his eyes. Overall, the cast knocks it out of the park here. 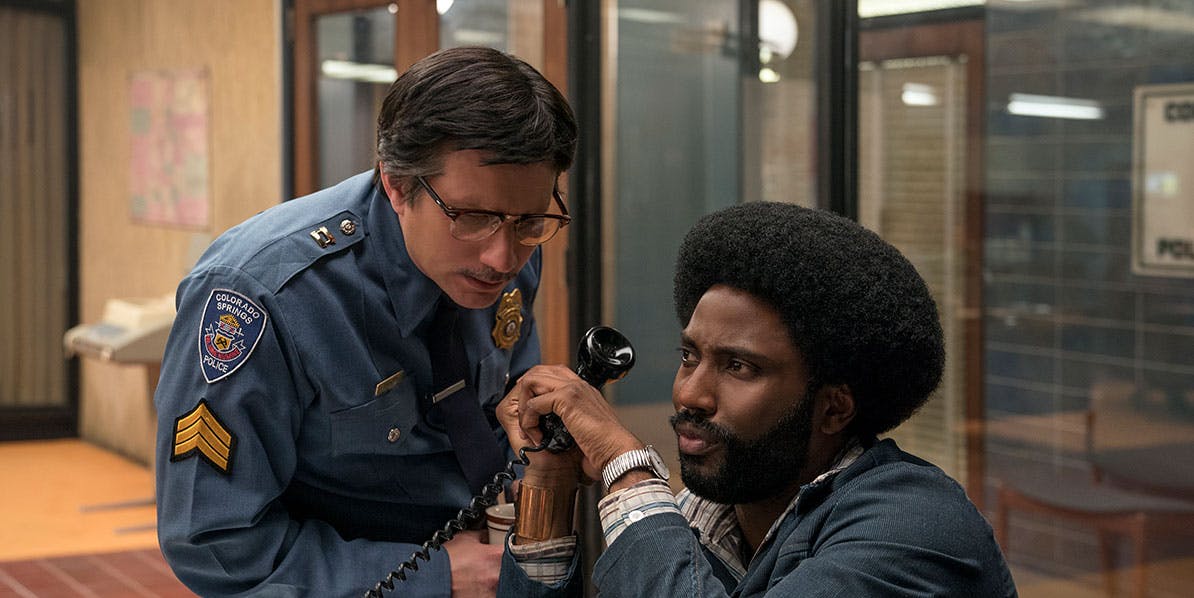 On a technical manner, BlackKklansman features some spectacular production design and costuming, but at points starts to falter. As I said, the production design is incredible. I have a soft spot for any film set in the 70s and this goes all in. The costumes are rich and the world is lived in. Spike’s signature style is here in spades and a treat for the audience to watch. However, the pacing at times is very fast and the editing gets a bit choppy. There is an action sequence near the end of the film that was very poorly done and a bit confusing to watch. However, this small annoyance is completely made up for by everything else BlackKklansman has to offer.

As you can tell, I loved BlackKklansman. It’s a bold, confident film with spectacular acting, amazing production design, and showcases the best of what Spike Lee has to offer. It’s not for the faint of heart but is more than worth your time. 5/5