The Marvel Cinematic Universe continues to expand as Black Panther and his accompanying cast of characters step into the spotlight.

Picking up in the wake of Captain America: Civil War, where Wakandan prince T’Challa (Chadwick Boseman) made his debut, Black Panther follows the king-to-be as he returns home to assume his rightful place on the throne. T’Challa faces not only dissenters and foreign threats alike — particularly those hoping to get their hands on Vibranium, a rare and valuable metal found only in the African nation, the most technologically-advanced place on Earth — but must contend with sins of the father (the recently-killed King T’Chaka, played by John Kani) as the past, and its surprising revelations, come to light.

To the world at large, Wakanda pretends to be little more than a backwater piece of land filled with farmers; in reality, the idyllic utopia must decide to remain hidden or drop its holographic camouflage and share its fantastic resources with a world, and its people, in need.

If Captain America: The Winter Soldier waded into political waters, Black Panther takes a diving leap into the deep end.

It’s your expected Marvel blockbuster at heart — in a good way — but there are deeper societal themes and questions at play, most of all when a ferocious Erik ‘Killmonger’ Stevens (Michael B. Jordan) steps up to disrupt Wakanda and make a play for the throne. Every bit as complex and interesting as Tom Hiddleston’s Loki, Killmonger is much like Heath Ledger’s Joker in how he commands the movie and forces it to perk up when he’s on screen — even if Black Panther never quite reaches the heights of The Dark Knight, it offers more than your typical Marvel Studios fare while delivering exactly what audiences have come to expect in a Marvel superhero blockbuster.

Story, humor, heart, and characters are blended beautifully by rising star Ryan Coogler (Fruitvale Station, Creed), who will, hopefully, consider becoming a recurring fixture in Marvel Studios’ stable of filmmakers. The first-time Marvel director sometimes struggles with the superhero action — at times the details of the fights disappear into a flurry of kicks and punches, especially in nighttime scenes — but never enough to impact the movie in a big way.

Its fights aren’t as clear and concise as the choreography offered and captured by the Russo brothers in The Winter Soldier or Civil War, but Black Panther is at its best when the super-suits are put away and Coogler and co-writer Joe Cole dig into the very human familial and political drama surrounding the throne.

Following a high-energy car chase action sequence in South Korea, Black Panther really hits its stride: the middle section of the movie, where revelations come to light and Wakanda threatens to tear itself apart, makes for gripping watching — owing a big hand to Jordan’s Killmonger, who is at that point driving the narrative and the resulting drama. 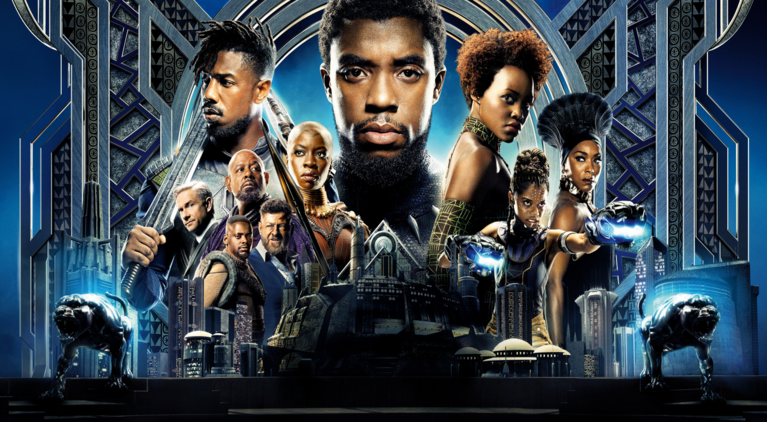 For everything Black Panther does well, it shines the most with its cast, populated by fresh faced up-and-comers and veteran actors alike.

There’s Okoye (Danai Gurira), General of T’Challa’s Dora Milaje, duty-bound not to Wakanda’s king but to its throne, and who is as every bit as charming and as fierce as Gurira’s katana-wielding zombie slayer Michonne from The Walking Dead; Nakia (Lupita Nyong’o), a globe-trotting war dog and T’Challa’s past flame; and Shuri (Letitia Wright), T’Challa’s 16-year-old super-genius sister and Wakanda’s technological mastermind.

The leading ladies of Black Panther are more than just supporting players and the newest icons representing Black Girl Magic: they are, at times, tasked with carrying the movie, a task pulled off with flying colors as they threaten to outshine even the movie’s titular character.

(It should be noted this is Marvel’s fourth consecutive movie with a Black female lead, following Thor: Ragnarok, Spider-Man: Homecoming, and Guardians of the Galaxy Vol. 2. The Disney-owned studio is big on representation, now more important than ever as the comic book movie genre continues to dominate the mainstream; Warner Bros.’ DC may have beaten Marvel to the punch with a female-lead movie in Wonder Woman, but the hype surrounding Black Panther proves how important is to explore other backgrounds and cultures, especially for those often too under-represented on the big screen.)

Forest Whitaker and Angela Bassett lend Black Panther its pedigree and are joined by a scene-stealing Winston Duke and the affable Martin Freeman, as well as a sometimes too hammy Andy Serkis. Black Panther’s commitment to Black Excellence started with its cast, one of the best Marvel has ever assembled, who help give Wakanda much of its life: the colorful African nation is realized beautifully in part, too, by costume designer Ruth E. Carter (Malcolm X, Selma), who lends Black Panther its popping design rooted in Afrofuturism.

Parts Iron Man, parts The Lion King, and parts James Bond, Black Panther is both a refreshing breath of air and identifiably Marvel, gifting the Marvel Cinematic Universe some of its best additions yet with its cast of characters — many who will return in May’s Avengers: Infinity War, acting in part as a double dose of Black Panther that will have to satiate us as we await the can’t-come-soon-enough sequel.

The revolution will not be televised. It will, however, play on every big screen near you. Black Panther opens February 16.