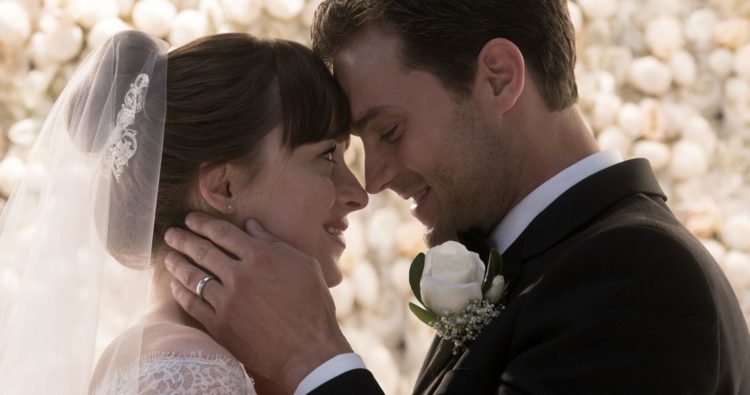 I’ve had a love-hate relationship with this franchise for the past three years of my life. On the one hand, they are almost objectively terrible in regard to any measurement of standards. On the other hand, that’s perfect for someone like me that has zero standards and loves to watch a trainwreck play out on the big screen. I wish I could tell you which of the three films is the worst, but they honestly all blend together for me at this point. Fifty Shades Freed is neither more dramatic or profoundly awful than Fifty Shades Darker was. It’s also not blandly mediocre with some sprinkles of hilariously awful dialogue and acting like Fifty Shades of Grey was. This one is just somewhere in the middle of the two in terms of quality. The best bits of this film is when it genuinely knows what type of film it is and dares to have some self-aware humor mixed in with the sex scenes. There’s a sequence with Ana eating ice cream that is absolutely hilarious and another quick gag with a bodyguard needing a handcuff that is even better. If this entire film was self-aware, I’d dare to say it’s actually competent entertainment.

Even with all the laughs that I get from these movies, I’m always going to find the dynamic between Ana and Christian to be toxic and I’ll never be able to overcome that when watching one of these movies. Even when I’m watching them ironically. Yes, I’m aware that Christian being so controlling is an intentional flaw that spawns from his childhood. Yes, I’m aware that all three films address it and evolve him a bit in each one. But at its core, the actual relationship dynamic continues to take away from some of the fun when I’m sitting in the theater for one of these movies. This has nothing to do with BDSM itself as much as it is the fact that Christian is the embodiment of emotional abuse and that (spoilers I guess?) this one doesn’t really resolve it at all. I’m aware that I’m talking about a fictional character in a franchise that is widely regarded for being awful and everyone knows it – but I think it’s important to point out how awful he is at several points in the film. But then again, I’m the one looking for emotional depth in a Fifty Shades movie – so what do I really know?

Can I send you to the theater to check out this third installment? It really depends on what you’re looking for in these films. If you’re wanting light entertainment where you can turn off your brain and enjoy the eye candy (both the hot people and the gorgeous materials they own) then absolutely! If you’re someone who actually genuinely likes these films, characters, and storylines – I legitimately don’t know if you’ll be satisfied with how it concludes as it is so ridiculously rushed and messy in its third act. I don’t actually know if this was a good Fifty Shades movie because maybe a twenty-year-old film critic isn’t the right guy to ask… or any guy really? My point is, I think you should assess your viewing of this one by what your relationship is with the other two films. There’s nothing about this one that is better or worse than the others. Like I said above, they all kind of blend together for me at this point. It’s been a fun ride of unintentional laughs and pretty people, but I’m somewhat glad that this franchise is hanging it up. 1.5/5