“American Sniper” is another Clint Eastwood directed classic. It features excellent performances, tense and suspenseful situations, and evokes emotions from the audience. If you look at this as a movie it’s phenomenal, and I’m not going to get into the politics of it, and how it differs from actual events/characters, but this is a truly remarkable film. Bradley Cooper delivers the best performance of his career, and Eastwood is right at home with another war movie.

My only gripe with “American Sniper” is with the ‘at-home’ scenes. These scenes help us by showing us the degradation of his character, his struggle with PTSD, his need to be a hero, and how he’s missing out on family time. They didn’t do a very good job setting up the chemistry between his character and Sienna Miller’s (his wife in the film), and that makes these scenes a little less than believable. Everything was right about Cooper’s character, Chris Kyle, but the relationship writing wasn’t as strong as it needed to be.

I really think all the performances were quite excellent, though some were better than others. Our two leads, Bradley Cooper and Sienna Miller, did a fantastic job in their roles, but no one else in the film really stood out as exceptional (though no one else was the focus of the story either). Cooper has really dedicated himself to the craft of acting, and put on over 30 pounds for this role. If you looked at him a decade ago it was like he was acting just to act, but now it seems like this has become a passion for him, and he is choosing more difficult roles and more complex characters. This is also the first time I’ve liked Sienna Miller in something since “Layer Cake” came out in 2004.

Now, I didn’t read the book, but I know enough about Chris Kyle to know that they took some liberties with his character to make him more likable, and help the audience get invested in his character. I don’t see this as being a political thing, but being a good decision on Eastwood’s part as a story teller. Why make a movie if people can’t get invested in the characters? The story was fast and even paced, giving you a breather from the action with the dramatic at-home scenes. Every action piece was putting audiences on the edge of their seats, and there were a couple scenes that had me squirming with suspense. This is a war movie that also has heart, and doesn’t glorify the violence. It reminds me of my favorite film from 2013 “Lone Survivor.”

“American Sniper” is not without its minor flaws (some sound mixing issues with the dialogue at the start of the film), but it stands as one of the best films of 2014 (it was officially released last year). Excellent writing, fantastic directing, and Cooper’s amazing acting help set this apart from other war movies similar in tone and message. Despite the changing of some character traits for the big screen adaptation, the film remains pretty faithful to actual events, and paints an interesting picture of how people struggle with Post Traumatic Stress Disorder in different ways. This is definitely a must-see! 4.5/5 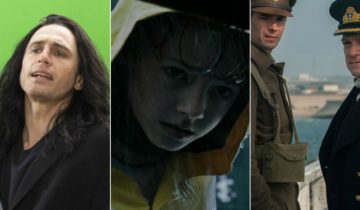