Most of these Best Of lists start out by saying how great of a year it has been for film and how it was hard to narrow down the “best” to just ten. While I do genuinely love these ten films, I can say that this has been one of the slower and least impressive years for films that I’ve lived through. Here’s to the one’s that did impress, though; and hopefully an even better 2019.

While I greatly admire Spike Lee as a filmmaker, I never really know what I’m going to get with his films as a large portion of his resume varies in quality. One thing that hardly ever changes is his approach for detailing politics in his art, and his embracive approach to being unsubtle and completely angry with passion. BlackKklansman is the best of what Spike Lee can do when he’s at the top of his game. It’s stylish, intelligent, unexpectedly funny, beautifully acted, and downright powerful. It’s his most impressive entry yet.

Is it really a top ten list if there isn’t a star-studded period piece on here? The Favourite is one of the most entertaining and amusing films of the year – until it isn’t. Yorgos Lanthimos perfectly balances the absurdist humor with the more darker elements at play. Emma Stone, Rachel Weisz, and Olivia Colman share wonderful and diabolical chemistry with one another; all three worthy of awards attention. Not exactly a crowdpleaser, but I ate its beautiful cinematography, wit, and performances up.

8. If Beale Street Could Talk

In his follow up to Moonlight, Barry Jenkins delivers a warm, heartbreaking, and unapologetically romantic film with If Beale Street Could Talk. I just love Jenkins’ approach to naturalism and capturing his characters so intimately. You get to know these characters so well and feel the love they feel so deeply – so when the despair inevitably hits, it hits ten times as hard. Not ashamed to say that it made me cry quite a bit by the end.

Most horror films that are hyped up to be “deeply disturbing” or are claimed to be one of the “scariest films of all time” don’t live up to the hype. While I can’t say that I jumped in my seat during Hereditary, I can say that the imagery and sheer evil within the frames deeply haunted me to my core and I’m still thinking about it here in December. Toni Collette and Alex Wolff give career-best performances in this, and Ari Aster proves to be one of the most promising voices in horror moving forward.

I’ve been a big fan of this franchise for a while now, because I’m constantly impressed by how each director is able to breathe new life into the franchise with each new entry that is made. On top of that, this franchise is also a vehicle for Tom Cruise to constantly top himself with crazy stunts. With Fallout he manages to make not only the absolute best film of the franchise, but one of the finest action films of all time. Every shot and frame of this film is perfected, every action sequence and stunt is exhilarating to the fullest degree, and the story and characters are still somehow not lost in the midst of it all.  In this, I believe Ethan Hunt is solidified as the best spy character of all time. Sorry, James.

The pure craft and mastery that is on hand in this film is truly unfair. Alfonso Cuarón is truly a master of the craft at this point. I was swept away by the intimacy and humanity of this film, and how every corner of every frame of this film felt like it mattered to the vision that Alfonso had for it. It’s heartbreaking, but at its core it’s about love and family – and that’s why it didn’t leave me totally depressed by the end.

4. Spider-Man: Into the Spider-Verse

I’ve been a huge fan of Spider-Man ever since I started reading the comics when I was only six-years old. I’ve at least enjoyed every movie that has come out about the webhead thus far, but Into the Spider-Verse is the best entry since Raimi’s Spider-Man 2 and the best encapsulation of what Spider-Man means and why he resonates with so many people. The message that anyone can wear the mask and be a hero is simply inspiring for anyone who has ever read a Spidey comic or seen one of the films and wished that was them. On top of all that sappy stuff, the animation on display here is simply some of the most stunning and dynamic that I’ve ever seen. I’ve seen it three times now, and it only gets better with each viewing. From the visuals to the characters and story – it’s truly something special.

Fred Rogers is the epitome of good. It’s almost hard to believe that a person could be so purely nice and loving just because it’s the right thing to do. This documentary is one of the most pleasant and inspiring films I’ve seen in quite sometime; it’s the type of film that makes you want to leave the theater and become a better person in your everyday life. Won’t You Be My Neighbor? is a brilliant and lovely dive into the cultural importance of not only the show, but the man behind it all. Love is truly all you need.

Much like The Favourite and period pieces, it wouldn’t be one of my top ten lists if you couldn’t find a coming-of-age film somewhere on it. Bo Burnham’s Eighth Grade is an intimate and extremely relatable portrait of growing up in the midst of the social media age. A lot of these films tackle themes of insecurities and anxiety, but this is truly one of the first to dive into how much social media’s presence affects the lives of teenagers. Even with that commentary out of the way, it’s just relatable for anyone who ever felt awkward socializing at this age. Elsie Fisher’s performance is so authentic, vulnerable, and lovely that it is nearly impossible not to root for Kayla to overcome all her insecurities and problems. This is just simply one of the most emotionally resonant and realistic films I’ve seen in a while. Total masterpiece.

A Star is Born has been done so many times that they had to include dialogue in this film acknowledging that this is a remake with the same story you’ve seen before. And yet, Bradley Cooper brings so much passion into this tired story that he delivers the absolute best telling of it yet. From the gorgeous cinematography, immersive concert sequences, a sweeping romance and chemistry between Cooper and Gaga, and a hard hitting, gut-punch of an ending – I can honestly say that this was the most memorable and beautiful experience I’ve had with a film all year. I was thoroughly entertained, charmed and delighted, and then absolutely destroyed by its emotion. Yeehaw. 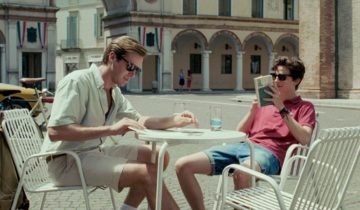