Magician, illusionist, entertainer, headliner, the greatest magician of all time – Las Vegas’ Criss Angel holds all these appellations and more, but it’s his role as loving and doting father to two-and-a-half year old Johnny Crisstopher that is most important. Star of Criss Angel Mindfreak, the most successful magic show in television history, and holder of an unceasing collection of titles – most-watched magician in history, Las Vegas Entertainer of the Year, Best Magician in Las Vegas, and even Magician of the Century – Angel now stars in the critically acclaimed Criss Angel MINDFREAK LIVE, where he astounds and perplexes audiences every Wednesday through Sunday at the Luxor Hotel and Casino. It was there, on September 12th, 2016, where a gathering of talented individuals came together for Criss Angel HELP – a one-night special event benefiting pediatric cancer research, treatment, and ultimately a cure, with 100% of every cent donated going towards funding pediatric cancer research. For all of Angel’s accolades and accomplishments, pediatric cancer has become his sole mission in life – and with a little help from his celebrity friends, we’re one step closer to making childhood cancer disappear.

Now in remission from acute lymphoblastic leukemia, it was Johnny Crisstopher’s diagnosis that sparked the renaming and refocusing of Believe: Anything Is Possible, Angel’s self-funded charity established in honor of his late father, John Sarantakos. The Johnny Crisstopher Children’s Charitable Foundation is just the latest of the performer’s steadfast efforts in helping children – working with children since 2001, Angel has been honored with the Make-A-Wish Grantor of the Year Award and the Chris Greicius Celebrity Award. “This is very personal. My son Johnny Crisstopher has leukemia. He’s not even three years old. He’s two-and-a-half, and he got diagnosed last year,” Angel shared at last night’s event. “I’ve been doing work with children since 2001, but this completely affected my life in a profound way. My only mission in life more than anything, more than my live show here at the Luxor, more than my TV show on A&E in October, is pediatric cancer.”

“We must raise awareness and dollars to change the unfortunate statistic, many statistics, that one child every three minutes is diagnosed with cancer, that it’s the number one killer of children from disease, and that of every $100 raised by the American Cancer Society, less than 70 cents goes to pediatric cancer,” Angel informed. “This is unacceptable and we must stand shoulder to shoulder as one people, in one world, for our children’s future. Let’s do it now. Let’s not let one more child suffer with life and death any moment of any day.” Sporting a pair of dark lens sunglasses – not from the constant presence of glaring lights and the flashing of countless cameras, but because he was “going to be very emotional” – Angel spoke passionately on his persisting attempts to make such discouraging statistics disappear.

“Tonight is the most important event of my life,” Angel asserted as his celebrity guests began to migrate onto the gold carpet. “Children are the most important aspect of life. Children truly are our future. If you don’t take care of the kids, why live? These kids need your help, help – heal every life possible,” he added, urging online viewers to donate. “So many incredibly talented people turned out for [the event] and it’s all for the kids, the children, that need a voice.” Angel’s sincere and heartfelt sentiments were echoed throughout the night, with longstanding comedian Carrot Top expressing his backing of the Luxor headliner. “Criss has been – I think locals know this – the most supportive of everybody’s charities from day one,” the fiery redhead divulged. “He always, always is there for everybody, so that’s why there’s such a big turnout tonight for Criss. It’s pay back, you know, he’s got a big heart. I love Criss.”

That respect and appreciation wasn’t lost on Angel, who conveyed his own gratitude. “I’m amazed. I feel the love. I don’t want it for me, I want it for the children,” Angel said of the support his fellow celebrities displayed over the course of the night’s events. “We’ve got a lot of lights on right now, we have video cameras going, but when all this stuff goes away, what I want people to think about is that child that’s in the hospital, dealing with life and death every moment of every day,” Angel added. “That’s what we should be doing this for. Not for Criss Angel, but for those children. So please go to CrissAngel.com and donate $1 to save a child’s life. It will be the best thing you ever do, I guarantee it.”

“It’s about the kids,” says Angel, who, more than most, understands the kind of magic that can happen when things like limitations and expectations are ignored, while imagination and creativity are embraced. Hailed as the greatest magician of all time, it says volumes that Angel’s greatest accomplishment or feat wouldn’t be a death defying stunt or a mind-bending illusion – no, his most worthwhile display of magic and spectacle is his continued commitment to raising awareness and funds in the name of pediatric cancer research. Magic is, in a lot of ways, about the unexpected – and the wonder. Maybe most never expected the Mindfreak – with his dark, ominous facade and gothic exterior – to be one of the most vocal voices in the battle against the tragedy that is cancer affecting the young, but Criss Angel is, above all else, a father.

As Angel proudly presented Johnny Crisstopher for the assemblage of reporters and photographers before him, his unending fatherly love and affection clear and as apparent as the Luxor’s Sky Beam – the bright and brilliant light perennially emanating from the Luxor’s onyx black pyramid, boasting the strongest beam of light in the world – it’s clear that Criss Angel is dedicated to the cause. We would all, given the chance, make any afflictions concerning our loved ones disappear – and while it’s not quite so simple as drawing a rabbit from a hat, it’s the continued support of friends, colleagues, and audience members that gives hope in light of the unfortunate circumstances concerning too many families around the world. Maybe it will never be possible to truly teleport or to walk on air without there being some kind of catch or some wizard behind the curtain – but it is possible that cancer, cancer of any and all kinds, can disappear; never to reappear long after the audience has released their “oohs” and their “ahs.”

Magicians, illusionists, and performers like Criss Angel have been popular since the days of Sepia and Harry Houdini because people believe in magic. Maybe it’s birthed out of the rigid and blind faith that many of us have instilled within us as children for Santa Claus, or maybe it’s the simple hope for something that’s wonderful and unexplained and indescribable that makes many of us – from the starstruck child at Disneyland to the grown adults seated in the Criss Angel Theater – want to believe wholeheartedly in magic. Even if we rationalize it, even if we know, deep down, there must be a logical way a motorcycle could appear on a stage that was only seconds before unoccupied – we want to believe. The annihilation of pediatric cancer isn’t about trickery or illusions. Instead, it’s about real, genuine magic – the kind of magic that happens when people come together and coalesce for a worthwhile cause. We have to have that belief about pediatric cancer; the belief that we can make a difference and that, with any hope, there will someday be children and families who won’t have to face the same kind of pain that Johnny Crisstopher and his family, and countless other families, have had to endure. On the day pediatric cancer is done away with – disappeared – it will be the greatest magic trick the world has ever seen.

“This is the most beautiful outpouring of love… I’m really speechless,” Angel concluded, the gold carpet event coming to a close. “I’m just grateful to everybody, both the people on the stage and behind the scenes, who have made this dream of mine come to fruition. Now the time is here. Luxor, and Cirque du Soleil, WWE, thank you, thank you, thank you for being such an incredible part of my dream to help children come to life. We are all filled with love and the outpouring of love is amazing, and we must stand together as one people for these children.”

With that, Angel and his celebrity guests moved inside for a live and silent auction. Items and one-of-a-kind experiences were on display – show tickets and meet and greets with headliners Britney Spears, Jennifer Lopez, and Celine Dion, autographed memorabilia from king of pop Michael Jackson, NBA superstar Shaquille O’Neal, boxing champion Mike Tyson, globally recognized icon Oprah Winfrey, and more – with all proceeds benefiting the night’s significant cause. The one-night-only live show that followed featured Angel’s guests in a spectacle never to be repeated, but Las Vegas residents and visitors can enjoy Criss Angel MINDFREAK LIVE every Wednesday through Sunday at the Luxor Hotel and Casino. Read our glowing review, and purchase your tickets from the official Luxor site. 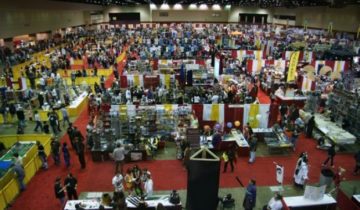