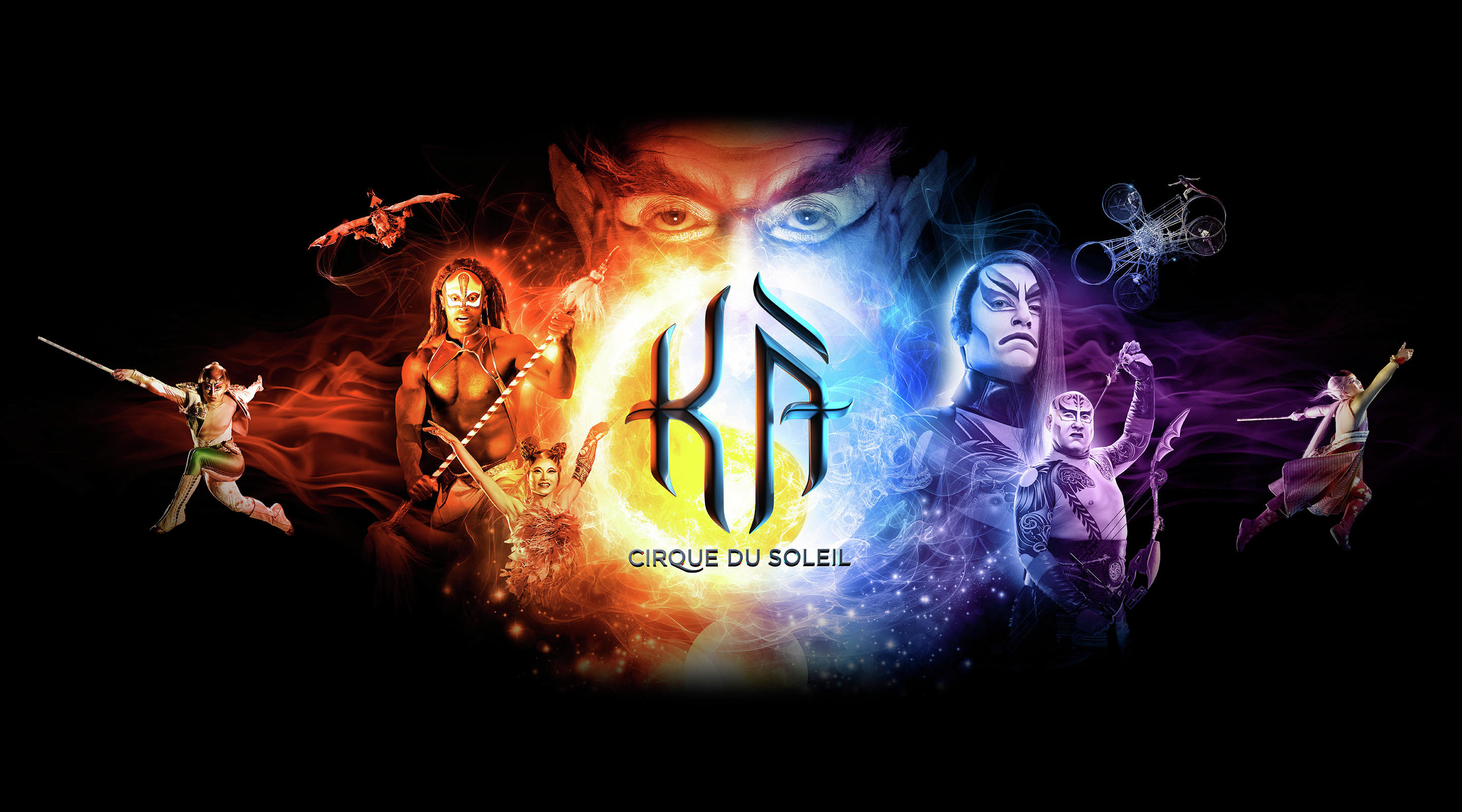 Known worldwide for their extravagant theatrical productions, Cirque du Soleil has long had a presence on the equally world famous Las Vegas Strip. KÀ – housed at the MGM Grand in Las Vegas, Nevada – is one of eight resident Las Vegas shows offered by Cirque du Soleil, with contemporaries The Beatles: Love, Criss Angel: Believe, O, Zumanity, Mystère, Zarkana, and Michael Jackson: One playing to thousands of audience members a night.

“[KÀ] may well be the most lavish production in the history of Western theater,” wrote the Los Angeles Times. “It is surely the most technologically advanced.” Indeed, KÀ boasts 80 performers, 240 costume changes, one epic battle – and a $165 million dollar production cost. That’s on par with the average cost of the Hollywood tentpole blockbusters that fill our local movie theaters every Summer, and KÀ offers an experience that can be best summed up as cinematic. It’s a living, breathing movie, realized through the art of acrobatics, stunts, projections, puppetry, martial arts, pyrotechnics, and immensely talented performers, with the show’s epic tale transpiring on a 360 degree rotating stage. Seemingly floating platforms move and reconfigure with each new scene, transporting audiences to an opulent pageant, to a perilous, stormy sea, to the high-trees of a jungle, to the stories-high, frostbitten edges of a cliff, and beyond.

“To each life that draws breath, to every living soul, there come those trials which none may avoid… love, conflict, and the duality of KÀ,” reads the show’s official Marvel comic book adaptation. “It is the essence that shapes our destiny, our very lives: fire that has the power to unite or separate… and the energy to destroy or illuminate!” KÀ tells the story of noble imperial twins, who – parted by a savage attack on their people – undergo their separate yet intertwined and hazardous journeys to fulfill their shared destiny. The warriors – covered in tribal tattoos and often accompanied by pulse-pounding rock music – threaten to enslave all those around them, with blazing fire signaling their threatening arrival. Flaming arrows fly and whips crack, and their presence looms constant: as unsuspecting viewers await for the show to start, the warriors descend from the sky, their harnesses being the only thing to remind you that these are performers and people – something easy to forget as they dangle and glide mere feet above your head, ascending and descending with frightening speed and ease.

The story is expressed visually, escorted by René Dupéré’s beautifully composed score, and some of the subtleties of the story may be lost or even entirely unclear to its audience – but the visual is such a spectacle that, for whatever aspect of the narrative that goes overseen, the enthralling performances and dazzling feats are enough to compensate for any confusion that comes from the show’s story. As the ever-moving stage rises vertically, with its performers scaling it with ease and making it look easy, it’s captivating. As these artists defy logic and, at times, physics, the results are a display of the utmost perfected craft, tirelessly developed by the production’s talented and dedicated crew members.

For every sprawling and magnetizing set piece, there are smaller, more intimate moments that are equally compelling. Whether the story calls for Capoeira dance – a Brazilian art form that combines fight, dance, rhythm and movement –  or acrobats soaring on ropes from above, becoming intertwined in a sensual connection, the show remains consistently fascinating and engaging. Intense and fast-paced martial arts give way to acrobatic exhibitions, which give way to aerial adventures, which give way to slapstick comedy with oafish sidekicks and an angry turtle, which give way to human moments of drama and love, giving way to jaw-dropping displays of raw, unimaginable talent that – were you not witnessing it for yourself – you’d never believe. One performer engages in a hypnotizing routine of baton twirling, ensnaring the audience in breathless anticipation at the pure skill unfolding on the stage.

The wheel of death – think of a windmill but with circular, hamster wheel cages at both ends – rotates and is controlled by strength and acceleration of its pair of operators, providing the biggest moment in a show that’s full of big moments when the performer runs atop it, flipping in and out as it rotates, daring gravity and pulling off a triumphant moment of conquest that’s worth the price of admission alone. It looks effortless, and you come to believe these performers could pull off these awe-inspiring abilities in their sleep, though you know the evening’s entertainment comes as result of, in the words of the comic, the “strength and skill that come only through the disciplines of patience and perseverance.”

I’ve only seen KÀ once – so far – and while my audience and I erupted into uproarious applause and a standing ovation by show’s end,  such reaction has to be a usual occurrence at the end of each astonishing performance. Strength and skill meet boundless imagination and creativity in KÀ, a must-see, thrilling, magical and notable production that comes highly recommended. A family-friendly show, KÀ is presented Saturday through Wednesday at 7:00 and 9:30 pm at the MGM Grand in Las Vegas, Nevada. Visit the official site here, and book your tickets here.